Irish first World War dead ‘may be higher than claimed’

Historian claims anomaly in figures for Sligo may be repeated nationwide 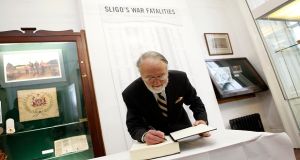 Retired Lieutenant Colonel Mark Scott signing the book of condolence at the News From The Past exhibition which is running up until the beginning of September in Sligo. Further information at newsfromthepast.ie

A local historian has said the number of Irish dead in the first World War may have to be revised upwards by a third, based on his own research.

Brian Scanlon has spent the last 15 years trying to record the names of everybody from Co Sligo who was killed in the first World War.

Mr Scanlon, a member of the Sligo Peace & Reconciliation Partnership committee and also a member of the Sligo Military History Association, has compiled the list based on his own research and that of members of the public who have contacted him. The project was funded by the European Union’s European Regional Development Fund.

The names are now on a plaque which was unveiled last night as part of a News from the Past World War 1 Exhibition in Sligo.

On July 18th, all 550 names will be read out at Sligo Cathedral. The names will be included on five different plaques which will be in the cathedral until Remembrance Day.

The Irish War Memorial Records, first published in 1922, list 395 dead from Co Sligo, but Mr Scanlon says his figures suggest that it is at least 550 died and possibly more.

He started his research as a private project because four of his mother’s uncles had been killed in the war and a fifth died of trench fever in 1922. The cut off point for recognition as a fatality of war by the CWGC is December 31st, 1920 and Mr Scanlon lobbied to have him included.

Mr Scanlon said the list of Sligo dead has expanded because many of those from the county who joined up did so in England or Scotland where they had emigrated and were therefore not included as either Sligo or Irish war dead.

Sligo emigrants migrated mostly to Glasgow and also to the east coast of England for the herring fishing.

He toured war grave cemeteries in England where those who were injured went to convalese to search the records for connections to Sligo.

His list also includes 11 Sligo men who died in the Canadian army, seven in the Australian forces (including one in the Australian navy), six in the United States army and two in the South African army. The war dead includes one woman, a nurse who died when the Leinster was torpeoded by a German U-Boat off the coast of Dublin in 1918.

Mr Scanlon said he only put names on the list if it could be verified that they served and were a fatality of war.

Mr Scanlon also revealed that he spoke to a man who was doing similar research in Fermanagh and he has added 200 names to the 400 which are already listed as dead from the county. “It’s not just me, this is not just an anomoly from my county,” he said.

There is no consensus on how many Irish soldiers died in the first World War. The most common figure that is quoted is 49,400 which is the number of soldiers included on the Irish War Memorial Records, but just 30,987 of them were born in Ireland.

It includes those who died while serving in Irish regiments. Many of them were not Irish.

A figure of between 28,000 and 35,000 is more commonly accepted now as the real figure, but more research has to be done even after 100 years. Mr Scanlon said the list is still open for inclusion.