The Irish tricolour turns 170 on March 7th. That makes it a lot older than Patrick Pearse 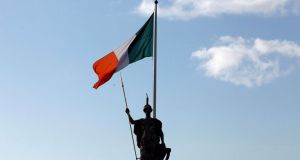 The GPO Witness History Visitor Centre in Dublin is staging the first permanent exhibition on the Irish Flag, to commemorate the 170th anniversary of the tricolour.

1 Although the 1916 Easter Rising made the Irish tricolour famous, it was actually first flown publicly in Waterford City in 1848. On March 7th of that year, Thomas Francis Meagher, a leader of the Young Irelanders, flew the flag from the Wolfe Tone Confederate Club at 33 The Mall, Waterford City.

2 Irish tricolours had been mentioned in 1830 and 1844, but 1848 eventually saw it flown at meetings all over the country, side by side with the French tricolour, to celebrate the revolution that had just taken place in France.

3 Ireland at the time was deeply divided between Catholic and Protestant, and suffering hugely from the effects of the “Great Famine”, which killed a million Irish people and caused another million to emigrate.

4 Thomas Meagher, the man who first flew the flag publicly, wanted a new Ireland, where Irish Catholics and Protestants joined forces for independence. In February 1848, he made a famous speech. He said: “what strength have I to beat my way towards that bold headland, upon which I have sworn to plant the flag I have rescued from the wreck?”

5 Meagher and the Young Irelanders were inspired by 1848 revolutions in Paris, Berlin, Vienna, Rome, Prague and Budapest, which overthrew kings and emperors from their thrones, and established democratic republics. These revolutions had inspired the Young Irelanders to overthrow British rule in Ireland, peacefully if possible. In April 1848, Meagher, William Smith O’Brien and Richard O’Gorman went to Paris to congratulate the French on overthrowing King Louis Philippe. While they were there, a group of French women wove an Irish tricolour made from the finest French silk and presented it to Meagher.

6 Back in Dublin, on April 15, 1848, Meagher presented this silk flag to the citizens of Ireland, and said: “The white in the centre signifies a lasting truce between the ‘orange’ and the ‘green’.”

7 Meagher was later convicted for leading the Young Irelanders’ 1848 Rebellion. Just before his trial, he told a huge crowd at Slievenamon in Co Tipperary that future generations would one day see the tricolour flag proudly flown across Ireland. Two of the rebellion’s other leaders later escaped to America to form the Fenian Brotherhood secret society, which later led to the Irish Republican Brotherhood (IRB) in Ireland. Many years later, the IRB organised and led the Easter Rising.

8 On Easter Monday, April 24th 1916, the IRB, Irish Volunteers and Irish Citizen Army flew the Irish tricolour from the top of the GPO in Dublin.

10 The green in the flag symbolises Irish republicanism dating back to the Society of United Irishmen in the 1790s and beyond.

12 Many Irish Protestants had been supporters of William of Orange, the Protestant Dutch prince who became King William III of Britain. As King, William defeated the Catholic King James II and his mainly Irish Catholic army at the Battle of the Boyne in 1690. Today, ‘Orangemen’ in the North continue to celebrate this Protestant victory with parades and bonfires on July 12th.

13 The white in the centre symbolises the hope for a lasting peace between the two cultures on the island of Ireland – nationalist, mainly Catholic Ireland, and unionist, mainly Protestant Ireland. The flag as a whole is therefore meant to symbolise inclusion and a hoped-for reconciliation of the various religions in on the island of Ireland, which is expressed in Article 2 of the Irish Constitution as the entitlement of every person born in Ireland to be part of the independent Irish nation, regardless of ethnic origin, religion or political conviction.

14 Sometimes you might see flags that have gold on them instead of orange. The Irish Government says this should be “actively discouraged” to foster peace and unity. They don’t want Protestants to feel left out. The Government therefore wants flags with gold on them to be replaced by those with orange.

15 There are special rules for using the national flag. The main rule is that no other flag or pennant should be flown above it. Care must also be taken not to let the flag touch the ground or become entangled with trees. The rules also say that the national flag should also never be defaced by placing slogans, logos, lettering or pictures of any kind on it, for example at sporting events. The rules also say the national flag should be replaced if it has become worn or frayed, as it is no longer fit for display in a respectful manner.