From the archive: Not a bridge too far for intrepid reporter 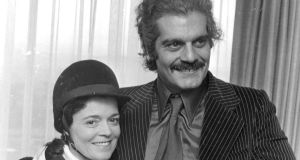 ‘I doubt if the game of bridge has ever before been given so much attention in Dublin,” begins the article which accompanied this photograph. It appeared on the front page of The Irish Times in February 1973, and it was written by one Lionel Fleming.

You may be thinking: bridge? But isn’t that Omar Sharif? And what does the lady in the riding-hat have to do with it?

Bridge was indeed the main topic at hand. Dr CC Wei’s Precision Club had arrived in Ireland for a two-day series of matches at the Burlington Hotel which would pitch its international experts against Ireland’s top bridge players.

One of those international experts was Omar Sharif, star of Lawrence of Arabia, Dr Zhivago and Funny Girl, and also one of the world’s highest-ranked contract bridge players.

If The Irish Times’s Lionel Fleming – who had covered the Spanish Civil War, reported from Ghana and worked for the BBC – was miffed to find himself despatched to the Burlo to churn out a couple of hundred words on this bizarre event, he didn’t show it.

Instead he produced a mischievous gem of a piece, casting himself in the role of intrepid reporter attempting to conduct an interview in the face of PR chaos. “Now, Mr Sharif, when are you going to act in another film?” he asks.

“Oh, quite soon, some time during the spring, I should think,” is the star’s reply. “It’s going to be called…”

But at this point, Fleming continues, “a loud female voice breaks in: ‘Omar, Omar! Come over here a minute, Omar! They want another picture.’ “

The story doesn’t explain why Mrs Deirdre Sheehan, of Newry, Co Down, is in full showjumping fig. Nor did anyone seem to think it strange that a man renowned for his on-screen elegance would wear quite such an unfortunate shirt/tie/suit combo. But the photo captures the impromptu mayhem of a time when PR events were much less stage-managed than they are now.