Fifty years ago the world was on the brink of revolution. Then the right struck back 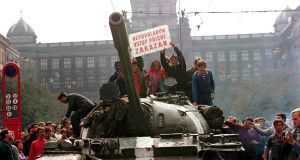 Czechoslovakia, August 1968: Prague residents and students on top of a Soviet tank in Wenceslas Square. Photograph: Sovfoto/UIG via Getty Images

In April and May 1968 the Rolling Stones were in the Olympic studios in west London recording a pulsating new track. The music had previously been attached to a different song, but Mick Jagger had come up with new lyrics after he was in the crowd at a demonstration against the Vietnam War that was charged by the police: “Everywhere I hear the sound of marching, charging feet, boy / ’Cause summer’s here and the time is right for fighting in the street, boy.”

In 1995, asked why the band was still playing Street Fightin’ Man on stage, Jagger shrugged. “I don’t know whether we should really play it . . . I’m not sure if it really has any resonance for the present day. I don’t really like it that much.”

1 Covid-19: State moves to Level 5 for six weeks with hopes of ‘meaningful’ Christmas celebrations
2 Life under Level 5: What will the next six weeks look like for Ireland?
3 With dramatic U-turn, Government weakens its own authority
4 Gardaí, media to self-isolate as officer gets positive Covid-19 result after JoJo Dullard briefing
5 Nphet letter predicts 50 daily cases by Christmas after six-week lockdown
6 Doctors’ letter calls for new strategy to ‘co-exist’ with Covid-19
7 Bill that overrides UK’s Brexit deal denounced in House of Lords
8 Dr Muiris Houston: ‘For me, the most shocking Covid-19 statistic of all is this…’
9 What would Level 5 Covid-19 restrictions look like for the country?
10 High levels of microplastics in infant-feeding bottles released during formula preparation
11 Coronavirus: Cases in State pass 50,000 as 1,031 new cases reported
12 Behind the scenes: How a weekend of talks and briefings brought us back to lockdown
13 Inquest into death of girl (17) in Mayo Covid ward stopped over rule breach
14 Covid-19: Belgium imposes curfew to battle ‘tsunami’ of infections
15 Fifty-six Covid-19 cases linked to man who failed to isolate after trip abroad
16 New restrictions risk pushing economy into double-dip recession
17 Life under Level 4: What will be closed under tighter restrictions?
18 BBC delivers a cliché of British TV drama: Sarah Greene’s alcoholic Irish woman
19 Click for home: The best Irish websites for online shoppers
20 ‘Brexit buster’ can ‘dramatically’ increase direct ferries to Europe
21 Government plans ‘Level 4-plus’ restrictions, with schools likely to remain open
22 75 reasons to be cheerful – by Mary McAleese, Chris de Burgh, Sinéad O’Connor and more
23 Sinn Féin tells State watchdog UK rules apply to €4m donation
24 Rory O’Connell: ‘I didn’t get to know my sister Darina until I came to Ballymaloe’
25 Reasons to be optimistic for a Covid-19 vaccine by Christmas, says expert
26 Living with Covid plan: What is in each of the five levels?
27 Working from home could save you 8 weeks and €3k a year, and halve your transport footprint
28 JoJo Dullard ‘met her death through violent means’, gardaí conclude
29 Michael McDowell: Six months wasted since last Covid lockdown
30 Mother and baby home documents should not be ‘sealed’
31 Britain and Europe in a Troubled World: A wise guide to Brexit
32 Driving test applicants to face eight-month wait for appointment, says RSA
33 Business owners hold mixed views ahead of increased Covid-19 measures
34 Conor Murphy declines opportunity to say Paul Quinn was not a criminal
35 Covid-19: Dutch royals cut Greek getaway short after public outcry
36 Turning Joyce’s house of ‘The Dead’ into a tourist hostel beggars belief
37 Covid-19 has shown that much of ‘normal’ life should have been binned years ago
38 Authority cannot refuse to register Mexican adoptions of two children – court
39 Claire Byrne: ‘My parents had to stand by the bed while I got the last rites’
40 David McWilliams: The rules of the property game have changed
Real news has value SUBSCRIBE