Walk from Strokestown to Dublin commemorates bid to migrate to Canada 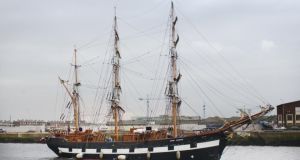 A walk commemorating 1,490 people who walked to Dublin to take a ship to Canada during the Famine will be completed on Wednesday at the Jeannie Johnson tall ship (above) at Custom House Quay. File photograph: Alan Betson/The Irish Times.

A group of people from Strokestown, Co Roscommon will complete a 155km commemorative walk to Dublin on Wednesday afternoon in honour of the 1,490 people from that location who took the same route in 1847 during the Famine.

They began the walk on Saturday and have been retracing the steps of the then Canada-bound Famine victims through Roscommon, Longford, Westmeath, Meath, Kildare and Dublin, along the tow paths of the Royal Canal.

Their walk will be completed at the Jeanie Johnston tall ship at Custom House Quay, where Minister for Arts Heather Humphreys will launch the official programme for the inaugural Irish Famine Summer School.

The school takes place at the Famine Museum in Strokestown House from June 17th to 21st this year.

The 1,490 people who undertook the walk to Dublin in 1847 were tenants of landlord Major Denis Mahon in Strokestown.

In that year alone he evicted 3,000 people from his lands, and offered some of them assisted passage out of Ireland.

Of these, 1,490 walked to Dublin and boarded four ships destined for Quebec.

More than 5,500 Irish emigrants of Famine times are buried at Grosse Ile in Quebec. Among them are five members of the Tighe family who took part in that 1847 march to Dublin.

When Bernard Tighe died, his widow Mary, along with her brother, took her five children on the walk to Dublin where they boarded the Naomi.

When the vessel docked at Grosse Ile, just two of the family had survived - children Daniel (12) and Catherine (9).

Two of the ships which carried Major Mahon’s former tenants to Canada were infamous coffin ships, the Virginius and the aforementioned Naomi.

On November 2nd, 1847, less than six months after they left Ireland, Major Mahon was assassinated near Strokestown House.

The beginning of a beautiful friendship, that stretched from Trumbo to Casablanca
10