Nationalist leader was ‘quite prepared’ to use violence, says grandson Michael McDowell 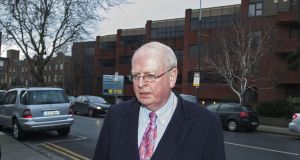 Eoin Mac Neill “was equally and utterly tough when it came to 1922 and the Civil War…he was absolutely clear that violence could be used’’, his grandson, former minister for justice and former tánaiste Michael McDowell has said. File photograph: Dave Meehan/The Irish Times

Nationalist leader Eoin Mac Neill was not some kind of “dotty professor’’ opposed to violence, his grandson, former tánaiste Michael McDowell, has said.

“He was quite prepared to use [violence],’’ he added.

Mr McDowell said Mac Neill had a clear view, however, that it should not be used in the circumstances proposed by Patrick Pearse in 1916.

Mac Neill, he said, was “a great patriot and a person who played his part in creating the State, of which we should all be proud’’.

Mr McDowell was speaking on Friday at a seminar on 1916 organised by the Irish Association of Former Parliamentarians in the Seanad chamber.

He said Mac Neill was “utterly tough’’ at a later stage in support of Irish independence, writing “a letter of rebuke’’ to the Archbishop of Tuam for suggesting Irish people were not entitled morally to resist British rule in Ireland.

“He was equally and utterly tough when it came to 1922 and the Civil War…he was absolutely clear that violence could be used,’’ he added.

Mr McDowell said Mac Neill was not a pacifist and had made it clear the Irish Volunteers could use force, morally and properly, provided that approach had a prospect of success.

He was a realist in 1916, in the sense he knew the rebels had approximately 1,100 weapons at their disposal and were very poorly organised, except in Dublin, he added.

“His views were that the Irish Volunteers should not contemplate insurrection in the context of they being hopelessly under-armed and under-prepared,’’ he added.

He believed the consequences of an insurrection in those circumstances would be morally unsustainable, he added.

Mr McDowell said Mac Neill’s countermanding of the Rising effectively confined it to the Dublin area.

It was probably the case that a broader Rising, planned by Pearse and the others, would have had none of the “benefits’’ of what took place and would have resulted in a much more widespread suppression of Irish separatism by the British, he added.

Historian Prof Gearoid Ó Tuathaigh said the Rising left a complex and, in moral terms, troubling legacy regarding the circumstances that justified the use of force in pursuit of political ends.

“Circumstances and our perspectives on past events are constantly changing and this will be reflected in the public debate on the ‘meanings’ of 1916 that will be prompted by the centenary commemorations this year,’’ he added.

“But it is incontestable that the Rising was a seminal event in the history of modern Ireland and a vital foundation act in the emergence of an independent Irish State.’’

He said, 100 years on, they were not required to endorse or to denounce the Rising.

“But we ought to strive, in the light of all the available evidence, to understand the event, and how it came to pass, in the context of its own time.’’

Dr Maurice Manning, chancellor of the National University of Ireland (NUI) and chairman of the advisory group on Irish centenary celebrations, said the group had stressed the central importance of ensuring that what was commemorated be utterly authentic.

“In 1966 we only told half the story,’’ he added. “Today we are big enough, mature enough and confident enough to tell the full story, to understand all sides and desist from interpreting events to justify current political agendas.’’

Dr Manning said that was not history. “It is propaganda - and we have had more than enough of it over the years,’’ he added.