Squares could be ‘cultural and social hubs’, says civic trust 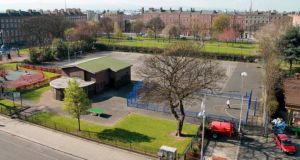 Mountjoy Square is one of the five Georgian squares that have, according to Dublin Civic Trust, largely untapped social and economic resources. While they have been the victim of severe neglect, the buildings of Dublin’s north Georgian core have more intact features than their counterparts in the south of the city because they were not “gutted” to accommodate office development to the same extent, Graham Hickey of the trust said. 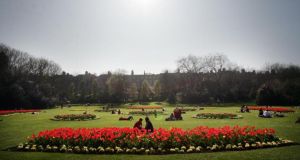 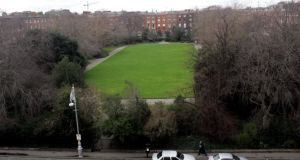 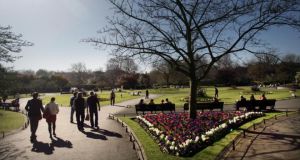 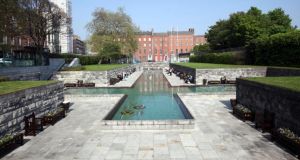 The Garden of Rememberance on Dublin’s Parnell Square. Dublin City Council’s plans to create a cultural quarter on Parnell Square give the square the potential to be a cultural hub of international standard. Photograph: Brenda Fitzsimons 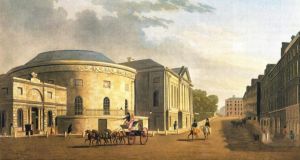 The New Assembly Rooms on Dublin’s Rutland Square in the 1790s, now the Ambassador cinema beside the Gate Theatre on Parnell Square. Dublin City Council’s plans to create a cultural quarter on Parnell Square give the square the potential to be a cultural hub of international standard. 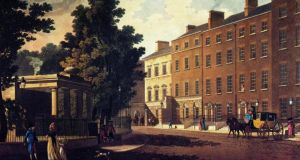 Palace Row, on the north side of Dublin’s Rutland Square, now Parnell Square, in the 1790s. Dublin City Council’s plans to create a cultural quarter on Parnell Square give the square the potential to be a cultural hub of international standard.

Dublin could develop its answer to Amsterdam’s Museumplein, London’s Exhibition Road and even Paris’s Palais Royal through the rejuvenation of its Georgian squares, according to the Dublin Civic Trust.

The five Georgian squares are more than just historical set pieces and, particularly those on the city’s north side, are largely untapped social and economic resources, the trust said.

It will next week hold a conference to celebrate the heritage of the squares – Merrion Square, Fitzwilliam Square and St Stephen’s Green in the south city and Parnell Square and Mountjoy Square on the north side – and to ignite a new era in their development.

The conference aims to stimulate public discussion about the conservation of the squares through exploring new uses for buildings and promoting new perspectives on the role and design of their gardens and parks.

Social vitality
It also seeks to explore how the economic and social vitality of the city could be enhanced through reshaping predominantly commercial uses on the south side and widespread inadequate residential standards on the north side into world-class community and commercial centres.

“While the conference day aims to showcase the historic significance of all of the squares of central Dublin, it will place a special emphasis on the north Georgian core of the city which for too long has been overlooked as an extraordinary cultural and economic resource,” conservation research officer with the trust Graham Hickey said.

While they have been the victim of severe neglect, the buildings of the north Georgian core have more intact features than their southern counterparts because they were not “gutted” to accommodate office development to the same extent. For similar reasons, they offer greater opportunity to foster a vibrant residential community, Mr Hickey said.

“The Georgian landscape of the area north of O’Connell Street, as laid out by the Gardiner estate over a century from the early 1700s, presents a potentially outstanding host to new residential and community life in the heart of the city, and as a backdrop to major cultural institutions.”

Cultural quarter
Dublin City Council’s plans to create a cultural quarter on Parnell Square, with the city library moving to the Coláiste Mhuire building and linking up with the adjacent Hugh Lane gallery, as well as the presence of the Gate Theatre and the Writers’ Centre, give the square the potential to be a cultural hub of international standard.

“Parnell Square in particular, with its cluster of existing and future institutions, has the potential to provide a counterbalance to the museum quarter around Merrion Square – what one might term Dublin’s answer to the Palais Royal and Louvre complex in Paris, or Amsterdam’s Museumplein or London’s Exhibition Road.”

The conference takes place in the Pillar Room, the former ballroom of the Rotunda, on September 13th. Further details at dublincivictrust.ie.

Helen Steele: ‘I left school with crippling shame about my intellectual capabilities’