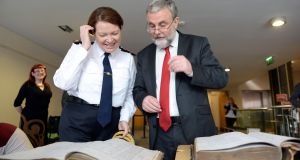 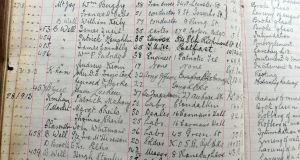 The three large leather-bound ledgers, covered in dust and cobwebs, were found in an attic of a house on Stiles Road in Clontarf. Each one was identified as a “Prisoners Book”.

They could so easily have ended up in a skip. Instead, they were yesterday described as “arguably” the most important recently discovered documents to come to light about tumultuous events in Dublin 100 years ago.

Dr John Howard of University College Dublin had no hesitation in describing the trove as documents of unequalled importance as they emerged on the centenary of the events that they record.

The files belonged to the Dublin Metropolitan Police, the force amalgamated in 1925 with the newly formed Garda Síochána, and were apparently removed at that time from where they were stored in the Bridewell. They detail the names, ages, addresses and occupations of at least 30,000 people arrested in Dublin between 1905 and 1907, 1911 and 1913, and 1916 and 1918 – along with the reasons for the arrests and the results of the cases.

The man who found the ledgers in the attic, who wishes to remain anonymous, took them to retired Garda detective Pat O’Reilly, who lived nearby on St Lawrence’s Road.

All four have now been copied digitally and are available via the UCD library. At a ceremony yesterday in Liberty Hall, the three missing ledgers were returned formally to the Garda Commissioner, Nóirín O’Sullivan, who pored over the pages intently with Siptu president Jack O’Connor.

O’Connor turned a page on another of the ledgers to show arrests for May 3rd, 1916. “That’s the day Connolly was executed,” he said.

The pages recorded “real moments in history,” said O’Sullivan, and were “an open window on to our past”.

She noted that some women were recorded as being arrested for “child stealing”, the police apparently galvanised into action because the Catholic Church fretted that children sent to England for safety by their mothers could not be guaranteed lodging there in Catholic homes. The police intervened, arresting mothers and,apparently, taking their children from them.

Another entry recorded a thief being sentenced to five years’ imprisonment – an 11- year-old thief, as the commissioner noted.

The ledgers were a record of the doings of “all the foul reserves of the slums”, said O’Connor, quoting with disdain how the Irish Catholic, one of the publications owned by William Martin Murphy, the businessman and newspaper magnate central to the lockout, described the impoverished people of the inner city of the time.

The ledgers give a detailed record of the rebels arrested, as well as of British army deserters, and of looters who took advantage of the chaos surrounding the Rising. Of the looters arrested, 80 per cent were women, according to Yeates.

“The most immediate fact to stand out is that possessors of loot were far more likely to be women than men, and married women or widows rather than single girls,” he has written in an article, The Women were Worse than the Men: Crime and Society in Dublin during 1916, written for UCD.

“In normal times men arrested for criminal activity outnumbered women by a factor of four or five to one in Dublin, and this did not change significantly during the war, although women were increasingly likely to be involved in ‘white-collar’ crimes such as fraudulent claims for separation allowances.”

Offences recorded for May 1916 include four cases of illegal possession of porter but 17 of flour, 12 of household items, nine of bicycles, six of boots, two of sugar, two of footballs and one each of soap and a perambulator.

“Only eight women were charged with more active offences,” writes Yeates. “Four of them with stealing boots, three with theft of jewellery and one was arrested with her husband for using violence to steal money. Almost all of these women came from traditional lower working class districts.”

Women were not arrested for soliciting but not infrequently a woman arrested for another crime would be described as a prostitute.

Fines imposed by the police magistrates ranged from five to 40 shillings for illegal possession. Quite a number of looters were let off with a caution.

Given the nature of the ledgers, it is appropriate that the only people gaining from their emergence a century on are those of the inner city. At the request of Michael Finn, Siptu has donated €3,000 for use by regeneration and youth project charities with which he is associated in Lower Dominick Street.

The four ledgers and Pádraig Yeates’s article may be accessed via: http://digital.ucd.ie/view/ucdlib:43945