An Irishman’s Diary on a Faroese hero 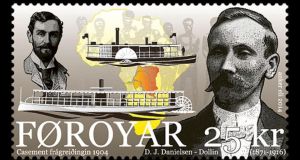 In the campaign to expose the appalling enslavement and exploitation of Congo natives by King Leopold II of Belgium, the names of two great humanitarians, Roger Casement (the 150th anniversary of whose birth occurred this year) and ED Morel, deservedly stand out. Now, thanks to the researches of Óli Jacobsen, a third name may be added – that of a humble Faroese missionary called Daniel J Danielsen.

Óli Jacobsen’s book on his fellow Faroese national has just been published and, to mark the occasion, the Faroese government has issued a stamp with pictures of both Danielsen and Casement. Adam Hochschild, the author of King Leopold’s Ghost, has described the book as doing “a fascinating job of restoring a previously forgotten man to his rightful place in the 20th century’s first great humanitarian crusade”.

Danielsen is remembered today, if at all, in the Faroes as one of the very early evangelists of the Plymouth Brethren movement there. He was also the first Faroese to serve as a missionary outside the islands, when he worked for the Congo Balolo Mission from 1901 to 1903.

ED Morel had been running a sustained writing campaign in Britain about the way natives of the Congo Free State were being treated, his information coming from British, American and Scandinavian missionaries, among others. Eventually the issue was taken up in parliament and the result of the debate was that Casement, the British consul in the Congo region, was sent to investigate the allegations.

In order to carry out an adequate investigation, Casement needed to be able to travel freely in the area but, hardly surprisingly, the Belgian authorities were not altogether willing to cooperate. He had to find an independent means of transport, especially to be able to travel up the Congo river to visit some of the more remote villages.

He had already established contact with Protestant English-speaking missionaries and eventually succeeded in hiring a steamer, the SS Henry Reed, from the American Baptist Missionary Union. The steamer was not in great working order and he was fortunate to meet and persuade Danielsen, who was an engineer, to accompany him on his journey.

He afterwards recorded his indebtedness to Danielsen, in a letter to the British foreign secretary, the Marquess of Lansdowne. “Mr Danielsen’s services were of the very greatest value: indeed without his help, I could not have proceeded very far on my journey. The Henry Reed is one of the oldest vessels still navigating the Upper Congo, having been launched in 1885. I think it was chiefly due to Mr Danielsen’s skill and hard work that she was kept running so long with me on board. As it was, we sprang a leak coming down the river on 13th September and apart from other consideration, I do not think it would have been possible to have the vessel continue running much longer.”

As well as acknowledging Danielsen’s invaluable help, Casement was writing to Lord Lansdowne to explain that he had refused to accept any remuneration whatsoever and to ask his superior to authorise him to make a modest donation to the Congo Balolo Mission, for which Danielsen worked.

Brutal flogging, the cutting off of hands and the taking of women hostage for the good behaviour of their menfolk were some of the barbaric practices perpetrated upon exploited Congo natives that Casement heard about, witnessed the results of and wrote about in his report, which caused a sensation when it was published and proved to be a turning point in the campaign to put an end to such atrocities.

Danielsen took some shocking photographs while accompanying Casement. Óli Jacobsen argues that these were of great importance in the public campaign that followed in Britain, because it was the first time an account of an atrocity could be illustrated so clearly to the public. Danielsen afterwards used the photos in lantern-slide shows at public lectures he gave as he campaigned to end the barbarities being inflicted on innocent natives in the Belgian colony of the Congo Free State.

Daniel J Danielsen and the Congo: Missionary Campaigns and Atrocity Photographs is available from olijacobsen@olivant.fo