A total of 1,198 people drowned when liner was hit by torpedo off Cork coast in 1915 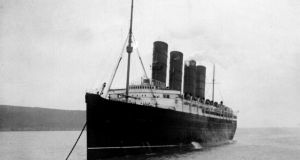 Cobh will mark the centenary of the Lusitania’s sinking with a five months programme of events. Photograph: PA

Cobh will mark the centenary of the sinking of RMS Lusitania with a five-month programme of events. The sinking of the passenger liner by a German U-boat during the first World War, with the loss of 1,198 passengers and crew, shocked the world. It caused outrage in the United States and was a critical factor in America entering the war.

The Lusitania sank 27km off the Old Head of Kinsale on May 7th, 1915. Boats from Cobh and Courtmacsherry rescued the survivors and also brought the dead back for burial.

An event on New Year’s Day to start the commemorations was postponed as a mark of respect to the Greaney family in Cobh last week. It is yet to be rescheduled.

It is planned that the carillonneur of St Colman’s Cathedral Adrian Gebruers will present a recital on the 49 bells of the cathedral, followed by a remembrance ceremony. It will be followed by a short recital by the Cobh Confraternity Band.

This will be followed by a short ceremony where the 1,198 victims of the wartime tragedy will be remembered. Schoolchildren will read the names of the 169 victims buried in the Old Church Cemetery in Cobh as the Irish Coast Guard launch flares from the quayside in Cobh and from the ramparts of Fort Mitchel on Spike Island.

The Cunard liner Queen Victoria will also be in Cobh as a part of its Lusitania Remembered voyage on May 7th – the day 100 years on from the sinking. In the evening, a flotilla of boats, large and small will start towards Cobh from Roches Point. Each will be illuminated with white lights. This event will symbolise the return to Cobh of boats full with victims and survivors. A museum dedicated to the Lusitania is expected to open 100 years to the day from its sinking, at the Old Head of Kinsale. The centenary will be marked by the blowing of the ship’s whistle for the first time since the events of 1915.