Ceremony marks centerary of US navy’s arrival in Cobh 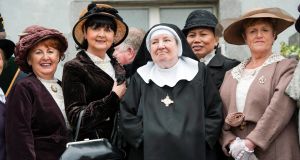 Mother Mattias of the Tyburn Order of Saint Benedict with members of the Cobh Animation Team during a plaque unveiling at at the former British Admiralty House in Cobh, which is now a convent. Photograph: Daragh Mc Sweeney/Provision

The arrival of six US destroyers into Cork Harbour 100 years ago, marking the US navy’s first involvement in the first World War, were remembered at a special ceremony in Cobh on Thursday.

Deputy chief of mission at the US embassy, Tim Forsyth recalled the role played by the US navy after its first ships arrived in the town, then known as Queenstown, on May 4th, 1917 – less than a month after the US entered the war on the Allied side and almost two years after the sinking of the Lusitania off the Cork coast.

“They braved rough waters, gale-force winds, and German U-boats to protect commercial ships around Great Britain and France. Unrestricted submarine warfare by the Germans was a huge threat and the sinking of the Lusitania and several other US merchant ships was on everyone’s minds,” he told those gathered for the ceremony at the former naval command.

The first wave of US navy ships to arrive in Queenstown were six destroyers from the US Atlantic Fleet, Division Eight led by Commander Joseph K Taussig on board the USS Wadsworth and he recalled the experience in his war-time diary, Queenstown Patrol 1917.

Commander Taussig recorded how all six ships in the flotilla, USS Wadsworth, USS Wainright, USS McDougal, USS Conyngham, USS Porter and USS Davis were escorted by the Royal Navy’s HMS Mary Rose to Roche’s Point where each ship picked up a Royal Navy pilot to guide them to their berth.

Of Queenstown, he wrote: “The streets were full of curious people and there seemed to me a great many men for a country supposed to be at war. I have learned since that the Irish people have generally held aloof from any participation in the war and do not consider themselves party to it.

“The Lord Mayor, a man of good presence and apparently genial temperament, made a speech of welcome in which he laid stress on the close relationship between the Irish and [the] Americans. He said that there was not a family in Ireland that was not connected to the United States by blood ties.”

Those blood ties were to deepen with the arrival of more than 9,000 American sailors to Queenstown and other parts of Co Cork including Aghada, Glenbrook, Whitegate, Bere Island and Whiddy Islands in Bantry Bay.

Joining Mr Forsyth and Port of Cork Chairman John Mullins in unveiling a plaque at the former Admiralty House was Commander Taussig’s great-granddaughter, Elizabeth Helmer. She is studying at University College Cork.

“I only found out before I started at UCC in January about my great-grandfather’s links with Cobh – it’s really special and made me feel more at home here – I didn’t realise how big a deal it was until a few weeks ago but I’ve been reading his diaries and learning more about him and his time here.”

The US navy in Queenstown is the subject of a photographic exhibition curated by Damian Shiels at the Sirius Arts Centre in Cobh entitled Portraits: Women of Cork and the US Navy 1917-19 which runs from May 5th until September 17th.