Call the Boolean Operator – An Irishman’s Diary on language, logic, and the marriage referendum 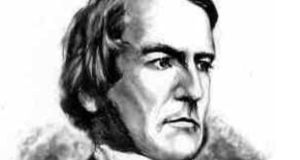 George Boole: had a fragile constitution, and Ireland’s damp climate didn’t help it

I share the regret of reader Neil Hallinan that Myles na gCopaleen is not alive at this hour to elucidate the confusion arising from the Irish-language wording in the marriage referendum.

If I understand the problem correctly, the literal translation of the Gaelic (providing for marriage between two people “whether it is the case that they are men or that they are women”) can be read as excluding heterosexual relationships from the new definition of the nuptially qualified.

And I agree that, with his unparalleled grasp of both the Irish language and the logic of absurdity, this would have been a situation made for Myles – a man who once had to issue a quasi-legal judgement even on the meaning of his own name.

Some people thought it should be “Myles of the little horses”. But he insisted it was “ponies” – ruling, in Solomon-like fashion, that the “sovereignty of the pony” could never be subjected by the “imperialism of the horse”.

Indeed, I won’t be surprised if George Boole is yet cited in evidence at a Supreme Court hearing on the matter, to advise on logical disjunction vis-a-vis the Boolean operator in the referendum’s Irish wording.

And maybe, in the end, the only lawyer-proof approach will be to insert a Venn couples-diagram in the amendment, with overlapping circles of “married men” (Set A) “married women” (Set B) and their intersection (Set C) to give absolute legal clarity on who may now marry whom.

But in the meantime, bearing in mind Article 25, which states that in the event of apparent conflict between the Irish and English versions of law, “the national language shall prevail”, I suspect even Myles might be nervous of getting involved.

He did give up writing in Irish, circa 1942, ostensibly because of a crisis of confidence brought on by Patrick Dinneen’s 1927 dictionary, which uncovered endless layers of hitherto unsuspected meaning in Gaelic vocabulary.

Of particular worry to Myles were words such as pianadóir, which in standard Irish-English dictionaries was translated as “pianist” but according to Dinneen meant “a punisher, a tormentor”.

Music critics might see the rationale there. But that and other discoveries about the language he thought he spoke fluently led Myles (mar dhea, as they say) to abandon his columns in Irish on grounds of safety: “Call me a bit fastidious [...] but I like to have some idea of what I’m writing. Libel, you know. One must be careful. If I write in Irish what I conceive to be ‘Last Tuesday was very wet’, I like to feel reasonably sure that what I’ve written does not in fact mean ‘Mr So-and-so is a thief and a drunkard’.”

Anyway, we have the assurances of many highly qualified lawyers (56 of them writing simultaneously to this paper earlier in the week) that, in pursuit of unintended literal meanings of law, the courts will not be led into the theatre of the absurd. So maybe, after all, the matter won’t have to go as far as Boole, never mind Dinneen.

In the meantime, whether he’s involved in the referendum or not, this remains a landmark year for George Boole. November will be the 200th anniversary of his birth in England. And in the December just past, for good measure, it was 150 years since his death in Cork, where he had been professor of mathematics.

You don’t have to be a mathematician to work out from those dates that his demise was premature. And in fact the sad circumstances of it demonstrate, inter alia, that marriage – between two people of whichever genders – is not always an unmixed blessing.

It’s true that poor Boole had a fragile constitution, and Ireland’s damp climate didn’t help it. Nor did his fateful decision to walk to university one day in heavy rain, and then lecture in wet clothes. But he might still have recovered from the resultant fever had it not been for his wife’s insistence on treating him with homeopathy, of which she was an early enthusiast.

On a hair-of-the-dog principle – that what made you ill could cure you – she poured water over him in his sick-bed, or at least over the sheets he was wrapped in. Surprise, surprise – the fever worsened, fatally. And thus expired, in very cruel fashion, a great champion of logic.