Call for Taoiseach to save 1916 buildings 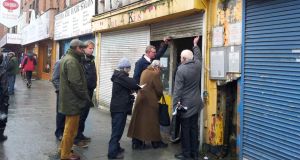 Members of the Save Moore Street campaign enter Number 16 Moore Street where the last headquarters of the Provisional Government was based during the 1916 Easter Rising. Photograph: Éanna Ó Caollaí/The Irish Times 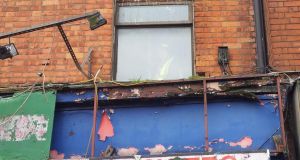 A member of the Save Moore Street campaign stands at the upstairs window of Number 15 Moore Street. Photograph: Éanna Ó Caollaí/The Irish Times 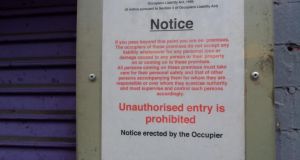 A notice placed by the owner of the site on the facade of Number 14 Moore Street. Photograph: Éanna Ó Caollaí/The Irish Times

Campaigners have called on Taoiseach Enda Kenny to take urgent steps to save the buildings that housed the last headquarters of the Provisional Government established in the 1916 Rising.

Relatives of the signatories of the Proclamation of the Republic expressed their shock and anger today at the condition of the buildings on Dublin's Moore Street following a visit to the site.

James Connolly-Heron, great grandson of Citizen Army leader James Connolly, Helen Litton, great niece of the Irish Republican Brotherhood's Tom Clarke and Lucille Redmond, grand-daughter of The Irish Volunteer's Thomas McDonough visited each of the buildings at 14-16 Moore Street this morning. It was the first time the campaigners were given permission to enter the buildings which have been closed to the public since 2008.

As many as three hundred Irish Volunteers and members of Cumann na mBan escaped to the buildings from the GPO after it caught fire following a bombardment by British artillery during Easter Week 1916. Volunteers broke into houses on Moore Street and tunnelled their way through the terrace and took up new positions in each house, making Number 16 their headquarters. After realising they could not escape without causing further civilian deaths, Pádraig Pearse subsequently issued the order to surrender on Saturday 29th April.

The buildings, which date back to 1763, were designated national monuments in 2007 but now face an uncertain future after development company Chartered Land, was granted permission for an 800,000sq ft development on the nearby 2.7-hectare site of the old Carlton Cinema on O'Connell Street in 2010.

A special advisory committee of Dublin City Council recommended recently that Minister for Heritage Jimmy Deenihan withhold the ministerial consent required for development of the site.

Speaking after this morning's extensive tour James Connolly-Heron expressed his outrage at the "shameful" and "shocking" condition of the buildings.

"I am staggered, I am shocked, I am appalled," he said.

"These buildings have been abandoned. A cursory glance from the outside would tell you that. But if you walk through them they are in a shocking condition. It's actually shameful at this stage how they have been allowed to deteriorate."

Number 16, which he described as "the most important house in the terrace," is in the "worst condition imaginable".

He said there are signs of water ingress and rotting timbers. "There are floors you can't walk on," he said.

"It was very emotional to stand in the very room where the decision to surrender was taken. I've never been in those buildings before. It was a moving experience but I have to say it was an experience filled with great anger because I can't imagine any other country in the world that would treat its history and heritage in such a cavalier manner."

Mr Connolly-Heron said the campaign to save the buildings was now at an "emergency stage" and said a team of independent experts should be appointed to assess the buildings.

"We can't rely on a developer to assess the safety of these buildings. They must be independently assessed".

"The developer has been Nama'd so we have the extraordinary situation where Nama are funding the consent applicaion to demolish the national monument. The State is funding an application to demolish what the State undertakes to preserve"

Calling on Taoiseach Enda Kenny to intervene, Mr Connolly-Heron said securing the future of the historic buildings is now  "a political decision".

"We've been now waiting for two years for a meeting with the taoiseach about this and that meeting is now imperative."

Proinsias Ó Rathaille, grandson of Michael Joseph O'Rahilly (The O’Rahilly) who died on a street adjacent Moore St after leading a sortie from the GPO in an attempt to break free said he was "horrified" at the condition of the buildings.

"I couldn't get over the appalling conditions of the walls upstairs. They're drenched. They're very bad. The floorboards are very bad. I feel the facade is crumbling forward and the back wall is crumbling backwards.

"There's water cascading down the back of this building. I've seen cattle barns down the country being treated better than this is.

Lucille Redmond said she was astonished at the poor condition they are in and called for a compulsory order to be placed on the buildings.

"I expected them to be bad but I was just astonished to see rotting bricks, dry rot, rafters with the ends rotten, joists braced up by steel, plaster falling off, lath and plaster ceilings open to the air. They're in a really, really, terrible state."

Helen Litton spoke of her alarm at the state of the buildings.

"It's unspeakable - the state things are in. This is an emergency."

"You wouldn't look after a dog kennel that way, you really wouldn't."