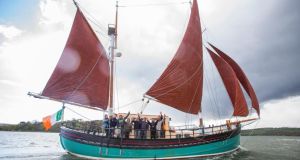 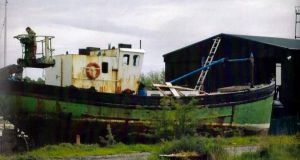 The Brian Ború, which was formerly known as the Investor, pictured when it was first lifted out of the water by current owner Tony McLoughlin at New Ross Boat Yard two years ago. 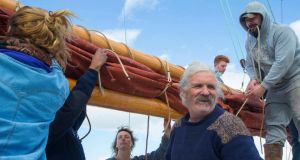 The Brian Ború wooden sailing ship off Cheekpoint, Waterford Estuary. In the foreground is Tony McLoughlin, the owner, securing the main sail with the crew. Photograph: Patrick Browne 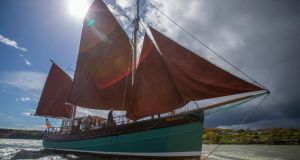 A chance encounter five years ago between a master shipwright and a wooden fishing boat which had seen better days has led to the start of a new venture.

From today, the Brian Boru Traditional Sail Experience will be on offer in the Waterford estuary.

The project, the brainchild of Tony McLoughlin and Grace O’Sullivan, offers visitors hour-long tours on board the 70ft wooden sailing ketch with lessons about the area’s heritage, culture and natural history.

The vessel, renamed the Brian Boru, still has its traditional rigging and wooden hull and is the only craft of its kind with a P3 licence, which means it is allowed to carry passengers up to three miles offshore.

Its base is Cheekpoint at the tip of the Waterford estuary, from where it was officially “launched” this week. It takes up active duty from Waterford’s marina at 11am today.

It embarked on years of herring-fishing on the seas around Ireland before ending up in Dunmore East in Co Waterford. The ship looked to be heading for a watery grave before Mr McLoughlin entered the picture.

“She was looking very much like a decrepit old fishing boat but I could recognise . . . that the vessel was special,” the Co Down native said.

He eventually bought it, convinced his background as a shipwright and designer could be put to use.

Ms O’Sullivan, his friend and a former Greenpeace campaigner, surf champion and Green Party European election candidate, then came on board.

“Any time Tony was involved in any project, such as the Dunbrody [tall ship], I was always interested, and he told me he had seen this boat in Dunmore East and I could see how much he wanted to pull away from it,” O’Sullivan says.

“But he was hooked. When he started working on the boat, I’d come along and give a hand every now and again.”

This is understandable, given the location at the confluence of the Suir, Nore and Barrow rivers which over the last millennium or so has been sailed through by Vikings, Normans, Cromwell’s fleets and the native Irish.

There are three daily sailings from the marina in Waterford to Little Island, but the Brian Boru is also available for private bookings. About eight people are employed, full-time and part-time, by the business.

With assistance from the Waterford Leader Partnership, they have got this far - but public reaction will decide if the project sinks or swims.