Apocalypse then: Day one of the Somme, 140 to go 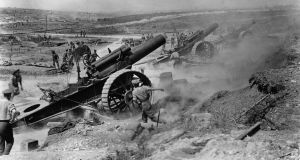 In the days leading up to the Somme offence in northern France, Gen Sir Henry Rawlinson issued a blithe communique to his corps commanders. The British guns, some 1,600 in total, had commenced the largest bombardment in history.

On an 27km (18 mile) front north of the river Somme, every gun the British could purloin was ranged against the German enemy. Some like the 15-inch howitzers fired a shell so large they sounded like express trains roaring overhead.

For six days and nights the bombardment continued. The British Tommies sheltering in deep dugouts could not sleep. The Earth rocked like a ship at sea. Rats fled terrified into no man’s land. The Germans, cowering deep underground, had nothing to eat or drink, yet surfacing meant certain death. One described it like a “hellish concert”.

“Nothing could exist at the conclusion of the bombardment in the area covered by it,” Rawlinson, the commander of the British Fourth army, told his generals. The complacency became infectious. One brigadier-general even told his men they could light up their pipes and cigarettes in no man’s land.

This presumption was at the heart of the disaster of the first day of the Battle of the Somme.

The British expended 1.76 million shells in the course of a seven-day bombardment. Incredibly, it was not enough. A third were duds. A third were shrapnel shells, ineffective against barbed wire. The remainder were high explosive shells. The area covered by the bombardment was just too vast.

High explosive shells were supposed to destroy the German frontline positions and kill all the occupants. But the German were sheltered from the worst the British could throw at them.

In late 1914, after the failure of the Schlieffen plan designed to defeat France in 40 days and avoid the necessity of a two-front war, the Germans made the strategic decision to concentrate their offensive operations against Russia on the Eastern Front. They would stand on the defensive in the west for long as it would take. The dry chalky soil of the Somme was perfect for building deep defences.

Churchill would later recall that the British attacked the “most perfectly defended position in the whole world”.

The discovery of the intact bunker ought to have given the British pause for thought at the Somme. Scouts found the German barbed wire intact. One battalion commander reported the uncut wire to his superiors but was ignored. His men were slaughtered. Riven with remorse, he shot himself after the battle.

Despite all this awkward intelligence, Rawlinson and the British commander in chief, Gen Sir Douglas Haig, proceeded with the “big push”. Too much men and material had been committed to what would be the biggest British offensive of the war.

For the first day of battle, the British had assembled 14 divisions and the often-forgotten French five. The area chosen for the assault, north of the river Somme, had no great strategic significance. It was simply where the two armies met.

It was supposed to have been a French- led initiative, but the French had been engaged for four months in the death grip of Verdun. The Tommies chosen for the initial offensive were nearly all volunteers who left the quietude of civilian life to join Kitchener’s army at the start of the war.

It took two years to train these unfortunate men and 10 minutes to destroy thousands of them.

The soldiers were told to walk abreast of each other and not run because the defenders would all be dead. They were urged to preserve their energies for a last sprint into the German front lines in the unlikely event that a few stragglers were still alive.

On the morning of July 1st, the British bombardment reached a terrifying crescendo. Shells whistled and screamed overhead as every gun roared in union. The Germans were attacked from above and below.

The British detonated 19 mines under the German lines. One, which created the Hawthorn Crater, was captured on film; another, the Lochnagar Crater, left a gash on the rolling landscape so vast that it remains a thing of awe to this day.

High above in his scouting airplane, the author Cecil Arthur Lewis watched the bombardment and concluded: “Nothing could live under that rain of splintering steel.”

For years the Germans had been practising bringing their machine guns up from the deep dugouts. The training had deadly consequences. The Germans won the race to the parapet and were able to direct withering machine-gun fire at a range of 2,000 metres on the advancing British.

The Tyneside Scottish assault on the village of La Boisselle quickly broke down. The follow-on brigade, the Tyneside Irish, consisting of Irishmen and those of Irish descent from the northeast of England, were mown down before they even got to the front line.

The Newfoundland regiment suffered 91 per cent casualties. The 36th (Ulster) Division showed extraordinary courage in taking the heavily fortified Schwaben Redoubt, but could not hold on because the attack on both sides had broken down.

The story was the same all along the 27km front. Brave men were slaughtered to no obvious end. What gains were made came with such as a vast expenditure of blood as to be rendered irrelevant.

This was a moral apocalypse – and yet only the start: the Battle of the Somme would last a further 140 days.

It was also the worst day in Irish military history, with more than 2,000 from the 36th killed. But often forgotten are the four regular battalions from the North not in the 36th which suffered terrible casualties. At least 2,500 Irishmen were killed on the first day, of whom 469 were from what is now the Republic.

But more than men died at the Somme. Hope, optimism, trust in one’s betters, and in the British Empire, died as well.

“These were the best of the nation’s volunteer manhood,” the military historian Richard Holmes has observed, “and the merest glance at its casualty roll shows what the Somme did to the old world of brass bands and cricket fields, pit-head cottages and broad acres.”

Ronan McGreevy’s book, Wherever the Firing Line Extends: Ireland and the Western Front, has just been published by The History Press.