An Irishman’s Diary on Elizabeth Mathew, wife of John Dillon

An informative and acute observer 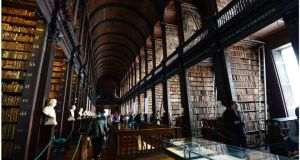 Her diaries (preserved among the Dillon papers in TCD) are a testament of her own unique unfolding as a remarkable person. Photograph: Bryan O’Brien

Elizabeth Mathew is remembered chiefly as the wife of the parliamentary leader John Dillon. But her diaries (preserved among the Dillon papers in TCD) are a testament of her own unique unfolding as a remarkable person. She was born in London – where her father Sir James Mathew was a judge of the High Court – 150 years ago today.

Sir James was Irish, a nephew of the famous temperance advocate, Fr Mathew, and a graduate of TCD. Her mother was the daughter of a vicar of Lympne in Kent. Elizabeth experienced security, acceptance and love within an affectionate family circle. The eldest of five children, she was educated privately and at a small day school. In the autumn of 1882 she began attending lectures on Old English and literature at King’s College, London.

Elizabeth was widely read, used to continental travel, and a frequent attender in the ladies’ gallery of the House of Commons.

She began learning Irish in 1893 and a poem written in Gaelic was dedicated to her the following year. The philosophy which inspired her was a blend of the assertive Catholicism of the age, her English liberal heritage, and the Irish nationalist aspirations of the Home Rule movement.

When they meet in Killiney, Co Dublin, in October 1886 Elizabeth records in her diary that he “is the first person who has awed me”.

Soon she adds: “I never met anyone who so absolutely embodied my ideal.”

By 1888 she writes: “It is really curious to me to find myself so entirely possessed by the love of Ireland and things and people Irish . . . Oh how I hope I shall be granted to make the home of my choice in Ireland.”

Her dream was not realised until 1895, however. Dillon was preoccupied with public affairs – notably the Plan of Campaign and the Parnell split – and perhaps inhibited by the family history of tuberculosis. It required Elizabeth’s courageous initiative and the encouragement of Anne Deane of Ballaghaderreen – Dillon’s widowed cousin who was like a second mother – to rescue him from a solitary life. But their happy marriage lasted only 12 years. Elizabeth died in 1907, probably of pneumonia, after giving birth to a stillborn baby girl.

She continued to write a diary from her 14th year until her sudden death, becoming an informative, entertaining and acute observer. For instance, from the outset of the divorce scandal Elizabeth thought Parnell should resign. Furthermore, “what right has he to speak as if he were the champion of the [Plan of] Campaign tenants, whom Mr Dillon has been toiling round the world to beg for while he has been amusing himself with Mrs O’Shea”. Her diary conveys an atmosphere of unfolding tragedy as the once great party implodes.

There is a hint of rivalry between Elizabeth and Maud Gonne. While awaiting the birth of their third child, she writes to her husband: “Don’t disturb my peace of mind by driving in the same carriage as Miss Maud Gonne.” She disapproves of Gonne’s advanced nationalism, political activism and (one may assume) bohemian lifestyle. A republican monopoly over the 1798 centenary committee having been broken, in 1898 Fenians, parliamentarians and poets led a procession (no carriages) through Dublin to lay the foundation stone of a monument to Theobald Wolfe Tone.

Gonne helped later to found the Transvaal committee, while the Dillons donated to the Boer Women and Children fund. Elizabeth deplored preparations for Queen Victoria’s visit to Dublin in 1900. “The town is being hung all over with Union Jacks and we are feeling very much ashamed. However, John spoke out at Thurles on St Patrick’s Day, so I hope the world will understand that he had nothing to do with Redmond’s unfortunate speech, which let loose the floodgates of snobbery and gave the worthless Dublin Corporation an excuse for their present conduct.”

Elizabeth noted a “tremendous outburst of loyalty amongst the Garrison” — augmented by “great numbers of excursionists” from Belfast. “But the people are looking on with polite indifference.”