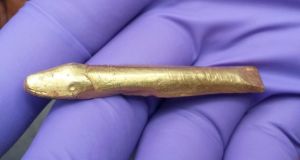 A rare golden fish believed by experts to be part of an ornate 7th century belt buckle, which was discovered by Barry Shannon on his aunt’s farm in Ballyalton near Downpatrick last year. Photograph: David Young/PA Wire

A fisherman who turned his hand to treasure hunting landed a rare golden fish on one of his first forays with a metal detector.

An inquest to determine whether the fish constituted treasure under the law heard that Barry Shannon, from Ardglass in Co Down, unearthed the decorative 7th century Anglo Saxon artefact in a relative’s field only four days after taking up the new hobby.

The 32-year-old was scanning the farm land owned by his aunt, Jean McKee, in the townland of Ballyalton near Downpatrick in the pouring rain last March when he heard a beep, Belfast Coroner’s Court was told.

After digging down a foot, he discovered the shiny 3in (7.6cm) long fish-shaped object, which experts now believe is part of an ornate early medieval belt buckle.

But given his other pastime, Mr Shannon told coroner Suzanne Anderson he initially mistook the item for an everyday bit of fishing kit.

“I’m a fisherman and it looked like a spinner you put on the end of a line to catch a fish,” he said.

Mr Shannon said the discovery was one of his first since taking up metal detecting.

“I only started four days previously - and that was only my fourth time at it,” he said.

Ms Anderson joked: “This was beginner’s luck then?”

Mr Shannon told the court he showed the item to relations and friends over the next few days and came to the conclusion the object might be not run-of-the-mill after all.

The local museum was contacted, but experts in Northern Ireland were unsure what he had discovered, as there was nothing else like it in collections the length and breadth of the island.

Their confusion was explained when a specialist from Cambridge University was called in to examine the piece.

It turned out it was Anglo Saxon in origin, and as the Anglo Saxons never settled in Ireland there was good reason why finding part of one of their belt buckles in a field in Co Down was all but unheard of.

Dr Greer Ramsey, the curator of Armagh Museum, told the court there were a number of theories as to how the fish ended up in Ireland, but nothing definite.

“In this case there isn’t a conclusive answer,” he said, relaying the conclusions of the Cambridge University analysis.

The expert said it could have been brought to Co Down through trade networks between Britain and Ireland, during one of two Anglo Saxon raids on the island in the late 600s, or as a result of the movements of Irish clerics travelling back and forth across the sea in a effort to spread Christianity.

“The tantalising thing is as this is quite rare, perhaps this points to something even more attractive existing in Ireland - perhaps even the belt buckle itself,” he said.

Ms Anderson suggested this opened up an interesting prospect for Mr Shannon.

“Are you going to go out and look for the rest of this belt and buckle?” she asked him.

Laughing, he replied: “Hopefully someone else will do it for me.”

Dr Ramsey said the age of the item and its content of precious metal - the foil casing of the fish is 85 per cent gold and 12 per cent silver - meant it constituted an item of treasure under the Treasure Act.

Delivering her findings, Ms Anderson declared the artefact to be treasure.

It will now go to the British Museum for valuation.

Mr Greer said it was anticipated that the item would eventually be purchased by National Museums Northern Ireland and would likely end up on display in the Ulster Museum in Belfast.

Concluding proceedings, Ms Anderson said it would be good if a wider audience could enjoy the artefact. “I would congratulate you on a wonderful find,” she said to Mr Shannon.