A century on: the Dáil loan that set the State on road to financial sovereignty

Michael Collins began an audacious plan on April 4th, 1919, to appeal to people to fund an underground government 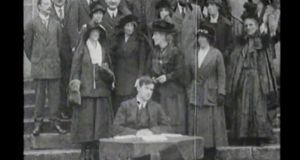 Michael Collins at the launch of the Dáil loan, surrounded by many prominent figures from the Irish revolution including the mother of Patrick Pearse and the widows of Tom Clarke and Eamon Ceannt. Source: Irish Film Institute

Nothing was left to chance by the newly appointed minister of finance to ensure the success of the first Dáil loan and to fund the counter-state government that had been set up when the first Dáil met in January 1919.

Two million promotional leaflets and 500,000 copies of the prospectus were printed and distributed. More than 50,000 letters were sent to high-net-worth individuals. Full-page newspaper advertisements were budgeted, and €30,000 in today’s money was spent on a promotional film.

The film was shot at St Enda’s College, the school set up by Patrick Pearse, and Collins signed the loan papers on the block on which Robert Emmet was beheaded in 1803. The film featured a who’s who of Irish revolutionary figures at the time including the mother and sister of Pearse, the widows of Tom Clarke and Eamon Ceannt, and Arthur Griffith, Eoin MacNeill and Erskine Childers.

The loan needed to be a success. Democracy is expensive. By June 1919, the secretariat of the Dáil had seven employees, and each of the new government departments were recruiting staff.

Office space had to be rented or acquired, ministerial salaries paid, and TDs - although not salaried - were entitled to travel and hotel expenses. Funding was needed for overseas diplomatic representation, the planned court system, and for multiple other government programmes. And the Ministry of Defence needed to pay for the sinews of war.

Side by side with the funding in Ireland, an external loan was authorised to be raised in America. However, floating the loan in this jurisdiction faced immediate regulatory and organisational problems. Funds were needed immediately to implement the ambitious plans of the first Dáil.

The external loan would ultimately be a success, raising £1.1 million (between $5 million and $6 million), but only half the money would ever arrive in Ireland, and the majority of it not until 1921. The ‘internal loan’ had to succeed.

Raising the loan presented numerous challenges to the non-sovereign underground government. Institutional investors - banks and large financial institutions - could not be targeted for investment. That left private individuals, but this created an immense logistical problem.

The natural distribution channels to organise investment - branches of the post office and banks - were not available to the revolutionary loan organisers. Instead, a new distribution network was created, a financial ‘Ho Chi Minh Trail’ between Dublin and the four corners of the country.

Couriers distributed the prospectus, promotional material and receipts for the loan and carried subscriptions (cheques, notes, coins, gold) back to Dublin. This logistics challenge should not be underestimated. Collins wrote the authorities went after the network with “determination and savagery”. Couriers were searched, sometimes three or four times a day and often at bayonet point, and those caught were jailed.

Many of the investors did not expect to receive interest payments, or even get their loan investment returned. And for good reason. The revolutionary government did not have any tax revenue, either to pay interest or ultimately redeem the loan after its 20-year term. The finance committee of the first Dáil created terms in the prospectus that were unique in the history of government financing.

The loan would become the first charge on the revenues of the Irish Republic “after the withdrawal of the English military forces”, and interest of 5 per cent would not be payable until six months after the Irish Republic had received international recognition.

The first subscription to the loan was received on August 26th 1919, and it quickly became apparent that new offices had to be found to house the expanding loan staff.

A loan war room was created in a large back office on the ground floor. Dan O’Donovan, an employee of the Department of Finance, was in charge of it. From here the distribution of the prospectus and promotional material was organised, and the loan registers were maintained.

Dáithí O’Donoghue had his office on the first floor. He was a familiar figure in the Dublin financial community. Impeccably dressed in a formal business suit and bower hat, he could be seen most days walking between 76 Harcourt Street, and various branches of the Hibernian Bank and the Munster & Leinster Bank, and frequently to the New Ireland Assurance offices.

In his early forties, he had been appointed secretary to the trustees of the loan. In this role, he would become the chief launderer of the proceeds of the loan, often carrying thousands of pounds on his person from the clearing houses around the city.

Working closely with Michael Collins, he put systems and processes in place to record, control and safeguard the proceeds of the loan. Bank accounts were opened using fictitious names, or the names of ‘trusted friends’. He was responsible for recording the amounts subscribed and the issue of official receipts.

Many years after the revolutionary period, O’Donoghue was proud to say he could personally vouch for the fact receipt was issued for every loan subscription received at headquarters.

The proceeds of the loan were used to finance the activities of the government departments. O’Donoghue maintained a coded system of accounts that were unintelligible to anyone but himself and George McGrath, who also had an office in No. 76.

Pressure mounted on the organisers of the loan towards the end of 1919. No. 76 was raided by the police and military on November 11th, and Collins and O’Donoghue narrowly escaped arrest.

The management of the government and loan was forced underground, and new offices had to be found. In the meantime, O’Donoghue and his wife worked night after night, sometimes until the morning, in their kitchen, with blankets fixed across the window blinds.

Despite the difficulties under which the loan was managed, as 1919 closed Michael Collins was quietly satisfied with the progress of the loan work. Only £30,000 had been subscribed, but he had secured promises of £100,000.

The pace of subscriptions increased in January and February 1920 to the point where the “figures indicate a very creditable achievement (and) assure final success to our efforts”.

But behind the scenes, the authorities had been planning measures to crush the loan, seize the proceeds, and even to secretly assassinate the leaders. OnMarch 2nd, 1920, an official inquiry summoned ten bank managers to appear before its instigator, one Alan Bell.

He was outwardly a resident magistrate and former detective with financial forensics experience, but he was in fact the unofficial head of British intelligence in Ireland.

Meanwhile, the authorities had initiated more clandestine ways to shut down the loan and the revolutionary government, including sending covert agents from London under the direction of Bell.

It would be a number of months before the Black and Tans arrived in Ireland, and Bloody Sunday was still eight months away, but a dirty intelligence war had already commenced. As the British agents drew closer to Collins, counter actions were required.

On March 2nd 1920, John Charles Byrne, one of the covert agents sent from London, was shot in Glasnevin, and on March 26th, 1920, Bell was taken off the tram on his morning commute from Monkstown and shot. The shooting of Bell was reported in the New York Times. It would mark the end of the aggressive British campaign to find and seize the proceeds of the loan.

The loan promotion work continued into April when Collins was confident enough to write that the result was “hopeful enough”.

But project management requires more than systems and processes. Collins still needed to harangue and cajole the less energetic loan committees, and the frustration was getting to him. He told Harry Boland this “enterprise will certainly break my heart if anything ever will. I never imagined there was so much cowardice, dishonesty, hedging, insincerity, and meanness in the world, as my experience in connection with this work has revealed.”

The loan was wound up three months later on July 17th, 1920. The final amount raised was £371,849 (equivalent to €22 million today). The loan was oversubscribed by almost 50 per cent. It was an outstanding success for an underground government setting up a counter-state in open defiance of an established and hostile administration. The people had backed an audacious dream of self-government on a distant, even unrealistic, promise of future repayment.

In that year, the Free State government approved a plan to repay the loan in full, including an interest return of 40 per cent.

The young State was sending a strong signal to international financial markets that it would honour its future sovereign obligations.

Patrick O’Sullivan Greene is a chartered accountant and equity analyst