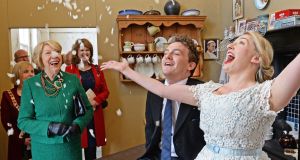 One hundred years to the day that 1916 rebel leaders were court martialled at Richmond Barracks in Dublin, their relatives attended the reopening of the site as a tourist attraction.

The barracks in Inchicore has been designated one of the nine so-called permanent reminders” of the Rising and has been redeveloped by Dublin City Council as part of the Ireland 2016 centenary programme.

It will open next month as an interactive multimedia centre which will trace the story of the site from military barracks, to housing estate, to school. It also has a tea room and landscaped garden area.

Tours will incorporate the adjacent Goldenbridge cemetery, which will be open to the public for the first time.

More than 3,000 people, including the leaders, were rounded up and taken to the barracks for processing in the days following the Rising. Pádraig Pearse, Thomas McDonagh, and Thomas Clarke were among those court martialled on Tuesday, May 2nd, 1916, in the gymnasium.

Those in attendance at Monday’s reopening included the family of former taoiseach Liam Cosgrave.

Relatives of the 77 women who were held at the barracks were also in attendance and their names were recited as part of the Flames Not Flowers performance art project.

Christina McLoughlin, from Dublin, said her uncle Sean McLoughlin and aunt Mary McLoughlin, then aged just 15, had been in the GPO during the Rising.

Their brother Paddy was in the Four Courts although it had proven harder to get information about him.

Deirdre Ní Enruigh, also from Dublin, said both her grandfathers had fought in 1916. Her mother’s father, John “Blimey” O’Connor, had come over from London in January 1916. Her paternal grandfather, Frank Henderson, captain of the F Company, came to the GPO from Fairview on the morning of the Rising.

The executive chair of Richmond Barracks, Eadaoin Ní Chléirigh, said the site had been part of the community in Inchicore for more than 200 years and had “a huge significance in Ireland’s national history”. The redevelopment by the city council, Purcell Construction and conservation architects Blackwood Associates with Margaret Quinlan Architects had been a “labour of love”.