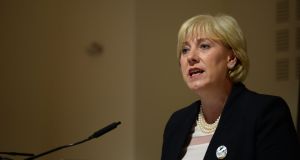 A package of €300 million in heritage and cultural funding has been announced by Minister for the Arts, Heritage and Gaeltacht Heather Humphreys. File photograph: Dara Mac Dónaill/The Irish Times

Funding for the renovation of the Kevin Barry Rooms at the National Concert Hall to create a new 130-seat auditorium is part of a €300 million heritage and culture package announced on Tuesday.

The capital funding which is to be provided between 2016 and 2021 covers built and natural heritage as well as money for the 1916 commemorations, and also provides for a six-year, €18 million package of grants for regional arts centres.

More than €9 million is to be provided for peatlands restoration over the lifetime of the programme.

The funding was announced by Minister for the Arts, Heritage and Gaeltacht Heather Humphreys, who said it would provide an important boost to the arts and cultural sector.

Key highlights of the programme include:

* The Ireland 2016 Centenary Programme - €30.8 million is being allocated to projects which are part of Ireland 2016, including visitor and commemorative centres at the GPO, 14-17 Moore Street and the new Tenement Museum.

* Heritage investment - €56.5 million in supports for built and natural heritage initiatives over the period 2016-2021.

Between December 14th, 1921, and January 10th, 1922, the rooms were the setting for the treaty ratification debates of the second Dáil Éireann, following the signing of the Anglo Irish Treaty in London on the previous December 6th.

The €18 million in Arts funding will see €3 million per year invested in buildings for regional arts and cultural centres, while more than €22 million will be invested in built heritage initiatives such as the restoration of national properties.

Funding for the Ireland 2016 Centenary Programme will allow for the completion of the Permanent Reminders projects, such as the GPO Interpretative and Exhibition Centre, Teach an Phiarsaigh, the Tenement Museum and Richmond Barracks, as well as others.

There is also provision for the development of a 1916 Commemorative Centre at the National Monument at 14-17 Moore Street to enhance and complement the GPO project, and for a number of other important commemorative projects.

Ms Humphreys said she had consistently argued “that as the economy improves we must invest in our culture and heritage. This €300 million investment package will provide an important boost to the arts and cultural sector.”