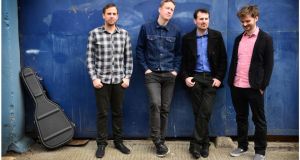 From dive-bombing bats in Cork to blood-sucking mosquitoes in Colombia, the Dublin Guitar Quartet takes it all in its stride. Photograph: Bryan O’Brien

The ups and downs of the music business are all in a day’s work for the Dublin Guitar Quartet. We’re not just talking scales and arpeggios here; the ensemble recently returned from a tour of Colombia that featured close encounters with irascible insects.

“That was me, yeah,” says Brian Bolger, as the quartet settle down to coffees in the Fumbally Cafe on Dublin’s Clanbrassil Street. “I was stung by a mosquito. I was stung several times by several mosquitoes. And on the plane home my foot exploded.” He ended up being trundled through the airport in a buggy – not a cool look – but was fixed within 24 hours by “megadoses of antibiotics”.

Well, you expect exotic stuff to happen in South America. Bolger and his fellow musicians Tomas O’Durcain, Pat Brunnock and David Creevy had been invited to perform in Colombia’s northern cities of Cali, Medellín, Barranquilla and Bogotá.

“It’s interesting over there,” says Bolger, “because the central bank takes care of the arts. They got into it via conserving the national treasures – the gold and so on. They opened museums, and then arts centres, and from that, they started to put on concerts.”

Dive-bombing bats
Back in west Cork you might think the quartet would be safe from marauding wildlife. Not so. They had another close encounter in a church in Skibbereen. “During the day, when we were rehearsing, it was fine,” explains O’Durcain. “But five or 10 minutes into the concert it became clear that there were bats high up in the church, and they came swooping down, dive-bombing us as we were playing. They were inches from our heads.”

Maybe it’s the music of Philip Glass that attracted them. It’s certainly attractive to human audiences – especially the newer compositions such as the String Quartet No 4, Buczak, which features on the programme of the quartet’s current tour of Ireland.

“When it first came out Glass’s music was very austere, stark, machine-like and rhythmically strict,” says Bolger. “But I think he has become more romantic and expressive, and obviously it’s important to bear that in mind.”

Dive-bombing bats apart, what are the challenges for a guitar quartet taking on this music as opposed to more orthodox classical repertoire? Is it a question of technical difficulty, concentration, balance between voices?

“It’s all of those things,” says O’Durcain. “Balancing everything correctly is definitely an issue. Another thing is getting sustain on a guitar. Obviously on a violin, that’s no problem. With a guitar it’s more difficult.”

“We have to use some strange tunings,” adds Bolger. “I tune my guitar closer to the way a cello would be tuned – a C and a G at the bottom, just to make it playable – and you have to use thicker strings to take the deeper tuning.”

Glass’s approval
The Dublin Guitar Quartet has earned approval from Glass himself for their arrangements of his work. Their new album, which features four of his quartets, will be released on October 5th on the composer’s record label, Orange Mountain Music.

Glass, however, doesn’t completely fill up the programme for the Irish tour. “We’re playing some Ligeti – he’s the guy people might know from 2001: A Space Odyssey – and some Arvo Pärt,” says Bolger.

“We’ll also do Steve Reich’s Electric Counterpoint, and Pat plays an electric guitar for the backing track on that, so there’s a different sound in there.”

Another different sound comes from the track Soundscapes Over Landscapes from the debut album by Dublin rock band The Redneck Manifesto – whose guitarist Mattie Bolger is Brian’s brother.

Following their autumn tour of Ireland, the quartet is off to the US, for shows in Florida, Washington, and New York’s prestigious Lincoln Centre. “That’s at 10.30am on October 27th,” says Bolger. “They call it a coffee concert. If you put on a concert at 10.30 on a Sunday morning in Ireland, it would be called a Solpadeine concert.” Now there’s a thought.