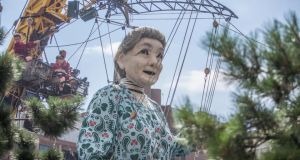 A giant grandmother is set to captivate audiences of up to 200,000 when she makes an epic journey to Limerick.

The most anticipated event in the Limerick City of Culture calendar will see a lovingly crafted 25ft grandmother marionette move slowly through some of the city’s landmarks.

A team of 27 has been tasked with handling the 85-year-old grandmother as she walks for three days around Limerick covering 19km.

Accompanied by a crew of 60 people attached to the French street art company Royal de Luxe, the forthcoming spectacle is costing about €1 million to produce.

The free family event takes place from September 5th-7th and has been flagged as the biggest event in Limerick since the Pope’s visit in 1979.

Mischievous
Described by her creator as “tough, daring and mischievous”, the Giant Grandmother, who attracted a

million visitors during her recent visit to Liverpool, will captivate the hearts and imaginations of all ages, according to those who have already followed her journey.

“Her character is intrepid, adventurous, mischievous, but overall she is full of tenderness,” said Jean Luc Courcoult, who has toured worldwide since 1993 with Royal de Luxe.

“Her face expresses a tranquillity, but her lively eyes give us the impression that she is completely aware of what is going on around her. Her wrinkles are almost gentle and transparent like a geographical map. Her character can be surprising, sometimes she gets swept away by incomprehensible details, not quite madness but more like an exactness that lives inside her,” he said.

The pipe-smoking grandmother will tell stories about Limerick as she journeys through the city while the Royal de Luxe band, accompanied by some local musicians, will perform music written especially for the event.

Arriving in Limerick on Setember 5th, the Giant Grandmother will call to Sarsfield Barracks, the Lee Estate and Shelbourne Park – among many other locations – before departing by boat from Limerick docks.

City of Culture director Mike Fitzpatrick said it was “an amazing project” and said he was proud that Limerick had secured such an event, acknowledging the “difficulties encountered in our early days as City of Culture”.

“She will walk 19km over her three days, so it is impossible not to encounter her whether it’s when she takes a nap in Shelbourne Park or in Sarsfields Barracks on the first night,” he said.

Oscars 2021 could be the best awards season ever
8