This very simple shooter doesn’t amount to much, but your bullets and explosions needs will be met 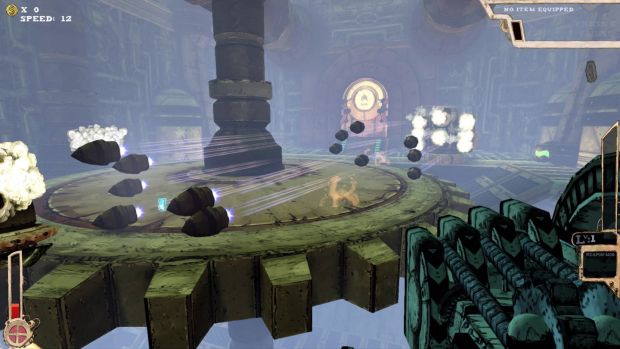 Tower of Guns… can a game live up to that title? The short answer is… almost.

You play randomised levels (a trend I approve of) and try to ascend a hellish tower of automated weapons and hostile environments. It’s a very basic gameplay mechanic – destroy objects, survive, go to the next room, repeat until death. You’re rewarded when you progress, with perks that include better guns, more health and so on.

The cartoonish graphics hark back to shooter classics such as Doom and Quake, and these visuals are matched with a decent score and metallic noises like rusting cogs and creaking machines.

There’s a nice variety of wacky weapons, including handguns that fire circular saw-blades, while your enemies include automated guns that fire floating, spiky and/or exploding objects. As you can imagine, this is fun and fast-paced, if a little dated.

Maybe it’s not fair to compare indie shooters to bigger-budget ones, but we do live in an age where you can fire hornets from your hands in one franchise (Bioshock), commandeer giant robots in another (Titanfall) and set wild animals on your foes in another (Far Cry).

Still, despite its limitations, Tower of Guns is an amusing and playable lark. And I did enjoy its self-aware instructions: “Doors open when you shoot them,” it says, “just like in real life!”