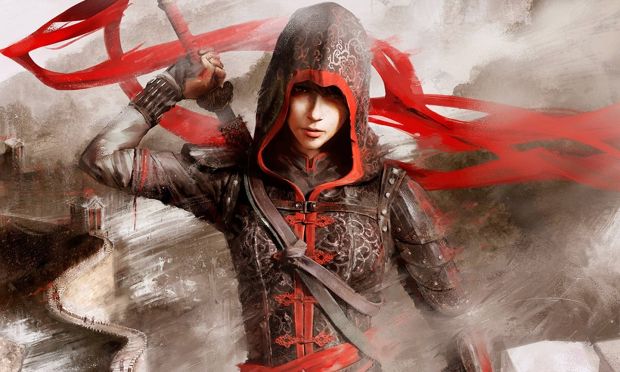 Now here’s a nice idea – an understated, different-looking, lower-budget spin-off series to accompany Assassin’s Creed. Some might say that the Assassin’s Creed Chronicles are a contrived squeeze of a beleaguered cash cow, but the first entry shows plenty of (Eastern) promise. And let’s not forget, many thought the recent spin-off game Rogue was better than the series’ latest main game, Unity.

Taking place in Imperial China, this follows a female assassin who plans to take down the local chapter of the evil Templars. It’s a 2D, mostly side-scrolling game, very like some of the early Nintendo DS Assassin’s Creed games, and there are also traces of the Trine series and early Castlevania and Prince of Persia games (all good influences).

The highly detailed look of the AC series has been ditched in favour of striking watercolours and graceful, less realistic but more fluid character animation. Beautiful, painterly backdrops are offset by sporadic bright red arterial sprays of blood.

Just like in the other games, ACC: China rewards stealth. The controls are intuitive and complex, as you hide, sneak and then slice your way through prisons, temples, docks, boats and towns. There are familiar AC tropes such as “eagle eye” vision, which lets you see things in more detail. And the combat, despite looking different, has similar principles to in the main series – a ballet of timed blocks and strikes.

It’s a sophisticated, engaging game for the most part, though some flaws emerge. Some gadgets are unreliable (throwing knives seem only to anger enemies), and in some moments your avatar moves more slowly than in others (like when descending from a wall or reacting to being found).

Minor problems notwithstanding, this is a fine game and a fitting chapter for the secret society of history’s deadliest killers (and most skilled hide-and-seek players). This China chapter is soon to be followed by games set in India and Russia, but alas, not Ireland.