Freud is sexually obsessed with his mother? She’s one lucky woman 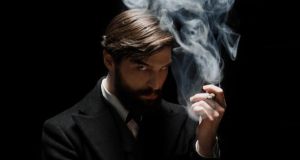 In order to help others during the lockdown, I’ve been doing a video correspondence course in psychoanalysis. The course is called Freud and it’s in eight parts on Netflix.

When it’s finished, I believe I will be fully qualified to give therapy. (For the moment in my unauthorised psychoanalytical practice I just keep saying: “And how did that make you feel?”) I will also be able to fight crime and speak Austrian, which my wife insists is the same as German.

Freud is my favourite kind of correspondence course/TV programme, one in which a person with an idiosyncratic job also fights crime. The best of these was BBC’s Bonecrushers, in which each week a bunch of archaeologists, instead of working on motorway development, found an excuse to battle archaeologically themed criminals.

Sigmund Freud? Sigmund Phoar-eud, more like. This is a young and handsome version of the Viennese mind-herder

In this instance, our hero is Sigmund Freud, the father of psychoanalysis who, along with a distressed war veteran and a sensuous Hungarian psychic, ends up trying to battle a serial killer, who, presumably, will turn out to have had a complicated childhood.

Frankly I’m surprised historians of psychoanalysis don’t make more of this part of Freud’s life. I’m also surprised more isn’t made of how dreamy he was, given that dreams were kind of his thing.

Sigmund Freud? Sigmund Phoar-eud, more like. This is a young and handsome version of the Viennese mind-herder (Robert Finster) with angular features and come-hither eyes (the actor’s own). If this version of Freud is sexually obsessed with his mother, well, all I can say is, she’s a very lucky woman.

Sadly, Phoar-eud exists in a world that appreciates neither his psychoanalytical gifts nor his hunkiness. He is surrounded by medical folk with huge beards and sideburns like hedgerows who continuously scoff at him. Freud has but a small beard and some highfalutin ideas about the subconscious and thus he is sad.

He is also on the gak. He gobbles down drops of cocaine with his historical chum, the writer Arthur Schnitzler, and they go carousing to the opera, where we see the crown prince Rudolph (prior to his job with Santa). Then they go to the house of two aristocratic goths in eyeliner who have arranged a seance. At this event the sensuous psychic from paragraph four endeavours to talk to the dead on behalf of a grieving widow, her sullen son, her precocious daughter and their fluffy dog.

Instead she has bizarre visions. Inside her untherapised noggin, she follows the precocious child and the fluffy dog down a corridor in which she sees a naked man covered in blood.

“You know it’s a programme from continental Europe when they’ve got someone with their lad out,” says my wife authoritatively, and she has a degree in German from Trinity College (she also knew who Arthur Schnitzler was, but I thought I’d lead with the “lad” thing). The crimson nudeyman’s lad is out, like completely. It’s just sitting there like a supporting character. I’m sure if it appears again in later episodes it may even have some lines.

Sigmund Freud is too fearful to go down the wet tunnel. I’ll leave you sit with that for a few moments

While all this is going on, the noble but traumatised detective with an impractically pointy helmet, an impressively buoyant moustache and a jollier and less troubled sidekick, is trying to get to the bottom of a grisly murder. Earlier he dropped the corpse off at Freud’s place because Freud is also a proper medical doctor.

Then, it turns out, the little girl and her dog have gone missing. Could these cases be connected? Freud goes to another sexy party at the goth house where everyone is in the nude and creating a tableau (it really is a fun crowd).

There, off his head on cocaine and melancholy hunkiness, Freud tumbles into the bedroom of the psychic, and hypnotises her to see if she can remember more of her vision. Nowadays wandering drunkenly into a patient’s room would break many medical codes, but Freud is a maverick who plays by his own rules (these are called Freudianism).

She remembers more of her vision. In her mind she follows the little girl, the fluffy dog and the blood-soaked nudist down a canalside tunnel and into a room where unspeakable things are happening.

Ready? Okay in episode two, Freud is doing his hospital rounds, where he is still being mocked by his luxuriantly bearded superior for his belief that psychological disorders are real and rooted in childhood trauma. He is also mocked by the sullen brother of the missing girl, who is also some sort of medical doctor.

Freud tries to prove that a lady with psychosomatic paralysis isn’t just lollygagging by sticking a needle through her leg, but his large-whiskered boss is having none of it. “We have no time for your newfangled ‘brain science’ here, so-called ‘Sigmund Freud’!” he would say if this were written by Julian Fellowes. Instead he says something in German.

Meanwhile, the pointy-headed policeman with PTSD finds an amnesiac murder suspect he recalls fomenting war crimes and challenges him to a duel. There’s a lot going on in that sentence and if I was a trained psychoanalyst I’d say “let’s unpack that” but we don’t have time.

There’s a thriving duelling scene in Vienna, you see, where scar-faced fops attempt to stab each other with their long swords. Paging Dr Freud! No need, he’s already here, wandering phallically along the moist tunnel he avoided a few paragraphs back. Here in the tunnel also, for reasons of his own, is the duel-inclined policeman. I won’t give anything else away.

There are more psychic visions with the sensuous psychic. There are hypnotic therapy sessions. There are mysterious and malevolent Hungarian goths. There’s more blood-soaked nudity.

Freud is darkly entertaining and not quite as ridiculous as I made it sound. It is so much gruesome fun, indeed, that I feel no need to fact-check any of it and feel safe in recommending it as a history lesson. I’ve certainly learned a lot about psychoanalysis while watching it and will continue taking bookings for therapy via my Irish Times email address. How does that make you feel?

Over on the newly available Disney Plus, a 21st-century version of Freud and/or Mickey Mouse is available to us on The World According to Jeff Goldblum. Or should that be “Jeff Goldblum”? The famed actor is a charming monument to his own quirks, and he slinks around between invisible quotation marks.

In the first episode of his documentary series he explores the obsessive world of sneaker collectors (“sneakers” = “runners” to the likes of us). He visits a sneaker convention, does some YouTube unboxing, plays surprisingly good basketball, delivers a lesson on the development of vulcanised rubber, muses about the nature of capitalist consumerism, has custom sneakers made for his celebrity feet and demonstrates a fascinating turn of phrase (“[The convention is] Ellen Burstyn with an international congregation who worship at the altar of Mr Sneaker”).

Furthermore, everyone in the programme has an expression on their face that says, “Why is Jeff Goldblum asking me questions about runners?” I’d get Dr Freud on the case, but I suspect that Goldblum, like the Irish, is immune to psychoanalysis.