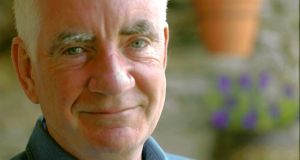 Bernard Loughlin was the first director of the Tyrone Guthrie Centre at Annaghmakerrig, Co Monaghan

The founding director of the Tyrone Guthrie Centre for creative artists has died suddenly following an accident on Friday at his home in the Catalan Pyrenees.

Bernard Loughlin was the first director of the centre at Annaghmakerrig, Co Monaghan, which is based in a house bequeathed by theatre director Tyrone Guthrie for use as an artists’ retreat.

Over the course of his 18 years at the helm, from 1981 to 1999, the centre and its surrounding lands and gardens were significantly developed and extended.

Annaghmakerrig has been used as a working retreat by many of Ireland’s best-known writers and artists including Colm Tóibín, Anne Enright, Joseph O’Connor and Sebastian Barry.

Following his departure from Annaghmakerrig, Loughlin moved to rural Catalonia, where he continued his passion for garening, birdwatching and the natural world. “He was a man for whom nature was very important, who was very connected,” his daughter Maeve said on Sunday.

In 2003, his memoir, In the High Pyrenees: A New Life in a Mountain Village, was published by Penguin.

He is survived by his wife, Mary and children, Maeve and Eoin.

John Boyne: ‘I am not a provocateur. I don’t seek to hurt people’
4

Has Britney Spears really been judged incompetent to vote?
5 The SAS man who wouldn't stay quiet
6

The bestselling book in Ireland for 2019 revealed
10