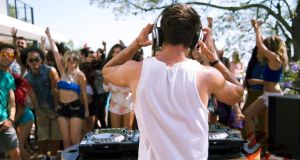 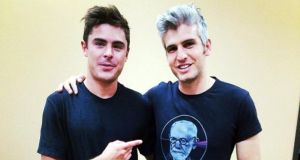 Zac Efron and Max Joesph: “I originally thought it was the music that resonated with Zac. It was more that he grew up partly in the Valley and had friends just like these guys”

Here’s a funny thing. It is more than 30 years since the first incarnations of house music emerged in and around Chicago.

We are now as distant from the second summer of love as the second summer of love was from the 1950s. In that period, electronic dance music has passed from underground fad to a multibillion dollar industry. It colonised the Balearics. Synthesised beats are the only beats heard in most American and European clubs. EDM (as it is called in the US) is its own institution.

For all that, on the very rare occasions when TV and movies tackle the interlocking dance scenes, they still approach them as if examining some obscure cult that communicates in lost runic alphabets. We see films about jazz musicians, rock stars and country singers. The organising forces behind club classics interest Hollywood less.

All of which is by way of introducing Max Joseph’s We Are Your Friends. The presence of Zac Efron in the lead role will draw much attention to this tale of a young DJ perfecting his art in the contemporary San Fernando Valley. This is a tale that should have been told 100 times.

“That is funny about electronic music,” says Joseph. “It’s been around since the late 1970s, early 1980s. It started in America. It went over to Europe and then it came back.”

Rather than start another argument in the style of “who invented punk?” we’ll set aside Giorgio Moroder, Kraftwerk and the rest and take US house as the starting point.

“It then became mainstream. It fed into rap and pop and dance music. It really is the rock’n’roll of its day. DJs are the new rock stars. It is now so mainstream there is a lot more of a motivation to do a movie about it. We started making a small, independent film that we didn’t think would get released worldwide. Zac came on board and it’s something different.”

Joseph, a New Yorker, who previously earned his keep on the controversial Catfish: The TV Show, makes an indisputable point when he compares the dance music scene to rock’n’roll. Yet rock’n’roll and cinema were bedfellows from the off. Indeed, films such as Blackboard Jungle and The Girl Can’t Help It played a vital part in popularising the music.

House, rave, drum’n’bass, big beat: these genres seemed to unnerve (or confuse) the industry more than the original devil’s music ever managed. Of course, many of the early enthusiasts would probably prefer the music to maintain its outlaw status.

“Some of this may annoy the ‘lifers’,” Joseph says of his film. “I would love to see a movie on the origins of it all. Paul Oakenfold. All the black DJs coming back to the UK and playing huge crowds in Manchester. Let’s start with a movie like that and maybe we will get there. I know there are some other electronic music movies being made.”

There are. Mia Hansen-Løve’s recent, rather wonderful Eden examined the dance scene in Paris during the early 1990s. But, once again, we felt ourselves looking at a hidden, underground sub-culture. It’s as if cinema continued to treat the new rock’n’roll as if it were some form of Dadaist improvisational noise experiment.

It is worth noting the uneasy comparisons between We Are Your Friends and Boogie Nights. Both follow a young man in the Valley as he makes a living in an industry that, though huge, rarely registers in respectable media. The suburban sprawl abutting the Hollywood Hills is a practically a character in the film.

“I grew up in New York City,” says Joseph. “We used to dis Long Island and Jersey. Every big city has its own suburb like that. There is always this bridge-and-tunnel mentality. People want to get out, but they also have pride. It’s America today. There are malls. It’s suburbia. There are all these people chasing the American dream with small businesses.”

It was the Valley connection that brought Efron on board. He was mostly raised a few hundred miles north in San Luis Obispo, but spent later years getting by in that baked suburban sprawl.

“He could have done any movie he wanted,” Joseph says. “I originally thought it was the music that resonated with him. It was more that he grew up partly in the Valley and had friends just like these guys. It resonated with his own life experience. He understood that story of trying to get out from the shadow of that early life.”

Since emerging in High School Musical, Zac Efron has proved to be a bright fellow with a taste for professional experiment. His arrival to the project inevitably inflated its profile. A film that started out as a personal project ended up as a star vehicle. Joseph says there are ups and downs to the added attention. I assume that, shooting on location, Efron must have attracted the odd photographer.

“Yes, just a little,” he says. “The paparazzi were a factor. I didn’t foresee the extent of it. It is really intense. They are everywhere. I don’t know how they know where he is going to be. But he handled it like a gentleman. He didn’t let it distract him. There are all these scenes where he’s smoking fake weed. So they were over that. But I am very proud of how he handled that.”

Most everybody who grew up within sight of the big city will understand bits of We Are Your Friends. It’s a classic formula that Max has long wanted to disinter.

“Trainspotting is among my favourite films of all time,” he says. “I love the tradition of male coming-of-age films like Saturday Night Fever or Mean Streets or Go. I love those films that work music into those stories. This was my crazy experience living in the Valley with one of these guys.”

This is Joseph’s first feature, but he has been around the industry for a decade. After shooting a few documentaries, he hit pay-dirt as host and camera operator for Catfish: The TV Show. Inspired by the film of the same name, the series digs beneath the lies and evasions of online dating. In particular, the film-makers focus on online romancers who construct fake personas. It’s a slippery moral area. At what point do the film-makers become complicit in another layer of deceit?

“I do understand the problems,” he says. “But I think it’s about helping people accept who they really are. It’s about taking these kids and making them look in the mirror. They are struggling with their identity. Whatever queasiness the show might have, I do think we are ultimately helping people.”

Travelling the country to find the humans behind the avatars, Joseph must have learnt a great deal about contemporary youth culture. He’s only 33, but that makes him an old man to many of the people he meets.

Pay attention, young people. Look to your elders. They got to the moon. They designed the first helicopters. They drove in buses at midnight and danced rurally to repetitive beats. It’s about time they got some respect.

How the press reacted when jazz music came to Dublin
9