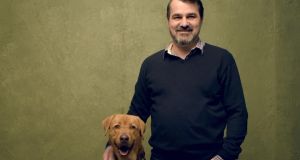 It is mid-May and Kornél Mundruczó, one of Hungary’s best young directors, is presenting White God, his new film, at the Cannes Film Festival. Thierry Frémaux, the festival director, escorts the star – smart in a crisp dickie-bow – on to the stage to receive much applause. Later, an actor from the film will receive one of the festival’s most celebrated satellite prizes: the Palm Dog. Yes, Body (pronounced to rhyme with “toady”) is an actual dog.

“The whole film started when I went to a dog pound in Budapest,” Mundruczó tells me, nine months later. “And the film really came together when we eventually found the two dogs. So, at Cannes, it was important to communicate that they were part of the crew. They are actors. So they deserved to be celebrated.”

A few days after the premiere, in a super-camp ceremony at the UK pavilion, Body followed canine actors from The Artist, Marie Antoinette and Behind the Candelabra in grabbing the Palm Dog.

All of this jollity should not distract from the dark brilliance at the heart of White God. The first thing you will notice is the film’s deeply peculiar structure.

It begins in the spirit of a Walt Disney live-action flick: a young girl becomes separated from her dog in the big city and sets out to track him down. The beast makes friends and enemies; all that’s missing for full Saturday-afternoon ambience is a Burl Ives voice-over. Then, in the last quarter, White God takes an apocalyptic shift as the dogs of Budapest rebel against their human oppressors. Some throats are torn out.

“Yes for me, I am always proud if somebody finds a reference from Walt Disney,” he says. “A lot of my childhood is in there too, of course. There is also a lot here about the pressures on society. That was a starting point. We use real dogs throughout. No CGI. So, on the one hand it’s realistic, but, on the other, it’s a fairy tale, like Walt Disney or the Grimm brothers.”

A broad man, much at home to the brooding humour that characterises his native land, Mundruczó extracted the seeds of White God from an allegorical passage concerning a dog pound in JM Coetzee’s novel Disgrace. He visited a similar facility in Budapest and, taken aback by the conditions, began to develop an ever more expansive story. “In two months I read all of Coetzee’s books and it really changed my way of thinking,” he says. “It is really close to my eastern European soul. There were parallels between South Africa and my eastern European home. And also the title, White God, is inspired by Coetzee’s work. He uses that idea: we, the colonisers, have the responsibility for society.”

White God is a hard film to read. In its opening sections, it plays very much as a personal drama. But the final act connects with all sorts of contemporary neuroses. At its least complicated, the film addresses the hierarchies we engineer between ourselves and other species.

But, as the comparisons to Coetzee confirm, this is also a film about the divisions within urban society. What if those flattened by capitalism decided to assert themselves?

Now 39, Mundruczó was a teenager when communism fell. So, his entire adult life has been taken up with contemplation of the new nation’s development. “I never thought I could become a film-maker,” he says. “I am not sure if this is a political film. I was part of a zero generation, very young when the Communists went running. So I grew up in this wild capitalism. It was much more that than real democracy. I don’t know if we are living with a democracy or something close to a dictatorship.

“Do we want to be part of the western world or do we want to face to the east and Putin’s Russia?”

Are those the only options? Must the former Communist nations make such a stark binary decision? “That’s the question. That’s always the question in a bridge country like Hungary. We have memory of 40 years living beneath real oppression. Putin’s Russia is a danger. But of course we can find our own identity.”

Mundruczó has worked hard to maintain a career in the new Hungary. Since 1998, he has directed some 15 short films and features. White God is his third picture to have premiered at Cannes. In 2005, Joanna, a take on the Joan of Arc myth, received strong reviews in the Un Certain Regard section.

Five years ago, the enormously puzzling Tender Son: The Frankenstein Project (which has almost nothing to do with Frankenstein), fared less well in the main competition. White God ended up winning Un Certain Regard last year and has finally established him as one of world cinema’s coming men.

“For Hungarians, winning Un Certain Regard that didn’t mean so much,” he says. “It is very useful in the industry. But we had a big audience for White God in Hungary and for that I was very grateful. People normally like comedies and, well, it’s not really that. Maybe, in a special way . . . Ha ha.”

It is worth noting that Hungarians – along with Austrians, Czechs and other eastern Europeans – helped to create Hollywood. It was, in its golden years, a middle-European industry straining hard to seem middle-American.

White God, with its gestures to genre, is the sort of art-house film that attracts offers from the dream factory. Might he give in?

“It’s a difficult question,” he says. “If you can keep your identity, then it could be a very good thing to do. But I am very much a Hungarian and making ‘product’ is not normally my way. We are used to a small market and a small language.”

We can understand that in Ireland. “Yes. But you speak a big language. Nobody understands Hungarian. It’s like our secret code. Ha ha.”