When All Is Ruin Once Again: Celebration of a simpler Ireland 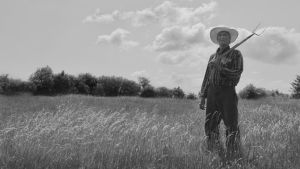 When All Is Ruin Once Again

Film Title: When All is Ruin Once Again

If lockdown goes on for ever we may eventually get to consume culture without mining it for observations (accidental or otherwise) on the continuing crisis. When, a few months ago, I first viewed Keith Walsh’s beautiful, allusive – if philosophically shaky – documentary, I did little ruminating on its presentation of economic paralysis.

The film, shot over seven years in and around Gort, Co Galway, cuts frequently to a nearby motorway whose construction was suspended during the last crippling recession. The contrast between a chronic and (we hope) acute condition is striking.

The motorway has wider allegorical value. Walsh’s film has much to do with a contrast between vanished Ireland and new, not always agreeable realities. The picture, shot in rich monochrome, takes us from traditional dances to fireside chats to a performance by an impressively raw rock group.

We touch on the (literally) sunken poetry of WB Yeats. We enjoy a festival staged by the local Brazilian community. Every now and then – often in pathetically fallacious rain – we cut back to the evil road stretching ineffectually towards a neoliberal nowhere.

Even if Pat Collins had not been thanked in the closing credits, thoughts would turn to the poetic psycho-geographer behind Silence and Living in a Coded Land (the English eccentric Andrew Kötting also comes to mind).

So persuasive is the film-making that it’s easy to overlook the unevenness of the argument. Voice-over tells us that the coming generation may be among the first to experience less comfortable lives than their parents (and current developments do little to undermine that view).

But the film’s celebration – constantly implicit, sometimes explicit – of an older, simpler Ireland won’t win over those still traumatised by the boredom and repression of that era. The older ladies interviewed here seem to get that.

The most attractive scenes, involving the Brazilian festivities, kick up contrasts with the monoculture we yawned through until the mid-1990s. There is a conflict between the progressive and the reactionary throughout.

Maybe that’s the point. We could see the film as striving for a synthesis between those two approaches. Whatever the intention, the journey is always enjoyable.

All Against All: A cautionary tale – and what 1933 can tell us about now
7