Warcraft review: never in your wildest fantasies could you have imagined this

Warcraft, the new film from Duncan Jones, is on general release today (May 30) 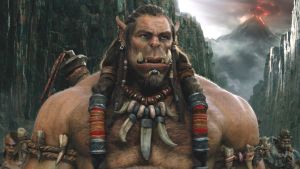 A detente with teeth: Toby Kebbell as Durotan, an orc looking to compromise

Around seven years ago, I signed on to the online role-playing game World of Warcraft. The notion was to dabble for a week or so and then write a few sarcastic words at the expense of people stupid enough to become addicted to this nonsense.

Around five years ago, I finally suspended my account. (I was too busy playing World of Warcraft to write the feature.) At no stage in the intervening two years did I develop any urge to see a film based on the creation. Why would I? You may as well adapt a bicycle or a power tool.

Duncan Jones’s tragically stultifying film owes its existence only partially to the popularity of Warcraft (the most successful entertainment entity nobody seems to have heard of). What finally got this project creaking into existence was the rise of Game of Thrones. Any old fantasy brain rot will now do, even something as useless as this.

Based on the Warcraft games that preceded WOW (get that wrong, critics, and risk being declared an “epic fail”), the script sticks grindingly closely to the franchise’s off-the-peg mythology. This means that, for fans, there are endless opportunities to nod knowingly when Bathrobe of Entar alludes fleetingly to the third Hearthrug War and that, for the uninitiated, there are endless opportunities to catch a little snooze as the dialogue drifts deeper into High Codpiece baloney.

Only the most diligent of disinterested viewers will make anything remotely lucid of the indifferently ordered plot. Among other issues, they will be forced to contend with computer-generated imagery that renders at least half the characters (the orcs that is) boringly indistinguishable.

Imagine a film in which most of the antagonists wear buckets on their heads and you’re halfway there. Come to think of it, my avant-garde bucket film – I got there first, Lars Von Trier – sounds notably more attractive than the generic, soulless screensaver visuals we get here.

Anyway, there is a plot. It seems that, a few years before ubiquitous broadband, a party of orcs burst through a portal from their doomed world and took refuge in the hitherto easygoing realm of Azeroth. If I’m getting this right, Durotan (Toby Kebbell), an orc who looks like all the others orcs, is minded to compromise and believes that, rather than eating the humans alive, his brethren should come to an agreement. He’s very much the Tom Hagen of the operation. Every other orc is Sonny Corleone.

Over in the human camp, Anduin Lothar (Travis Fimmel), a brave warrior, devotes all energies to honouring the king and queen (Dominic Cooper and Ruth Negga). Paula Patton tries hard as a half-human, half-orc pleb who, we assume, will eventually bring the tribes together. Huge battles interrupt the boring conversation with noisier, even less coherent tedium.

It generates no great pleasure to reveal the wretchedness of this grand enterprise. Hundreds of very talented technicians have laboured hard to produce the largely horrible images. More than a few decent actors debase themselves bravely in costumes that would not seem out of place in a Gaiety pantomime.

Most depressingly, Duncan Jones, director of the brilliant Moon and the equally strong Source Code, has contributed years to a project that will fully satisfy only the already devoted. Warcraft is a very modern sort of timeless myth. Its unnecessary faithfulness engages a relatively small demographic as it alienates the much vaster mainstream. It is, in that sense, the Ukip of fantasy movies.

Let’s end on a positive note. Fans of the consistently excellent Ruth Negga will be relieved to hear that she barely speaks in this lumbering disaster.