Review: The point of this fictionalised version of Anders Breivik’s atrocities is uncertain 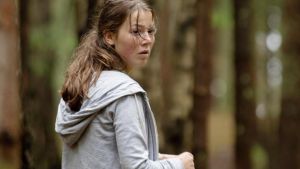 Andrea Berntzen is impressive as Kaja

The best thing about Erik Poppe’s skilful, seemingly single-take dramatisation of the 2011 Utøya massacre in Norway is that it doesn’t feature Anders Behring Breivik.

The camera seldom leaves the side of Kaja (the impressive Andrea Berntzen), a sensible 18-year-old who is attempting to locate her sister after the shooting starts at a summer camp for the left-wing Workers Youth League.

A brief overture uses CCTV-style footage to depict the Oslo bombing earlier in the day. News of that attack has started to ripple through the youngsters gathered on the remote island of Utøya, where intermittent mobile phone signals can make it difficult to check in at home.

Frustrations with communication devices add to nightmarish chaos to come.

Poppe’s film largely unfolds in real time – the attack took about 72 minutes – and uses real details throughout. Its effective reconstruction of the initial confusion as gunfire sounds and desperate children run for cover is powered along by Gisle Tveito’s disorienting popping, whizzing sound design. A final, upsetting 10 minutes leaves an indelible impression.

For all the realism, Utøya – July 22 cannot be described as a re-creation. An opening disclaimer explains that the characters are created by screenwriters Siv Rajendram Eliassen and Anna Bache-Wiig. A second disclaimer defends the fictionalised aspects of the film with woolier words: “Its basis is one truth – others may exist.”

So what is it, exactly? The marked lack of political discourse exempts it as a warning about the rise of the far-right. Although the resilient Kaja could, for a time, pass for a Final Girl, and her quest to find her missing sibling makes for a screenplay-shaping hook, it’s impossible to think of Poppe’s film as a movie, and it’s certainly not an entertainment.

It’s a grim, startling, and immersive experience, but without the historical rigour of Paul Greengrass’s Bloody Sunday or the comforting heroics of United 93, the purpose and point of the project seems uncertain.