The Stag: they’re going on a beer hunt 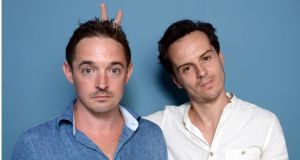 Andrew Scott (right) with Stag co-star Hugh O’Conor: “Comedy is hard. Most acting is about ambiguity. Comedy has no room for ambiguity. It’s making 700 people in a cinema laugh”

Andrew Scott doesn’t do a lot of interviews. And once you meet him, you start to get an inkling why. It’s not that he isn’t clever or witty or fun. No, ma’am. He brings all of these things to our morning coffee in abundance.

But the star of the incoming Irish comedy The Stag is – in spite of his profession – congenitally incapable of the kind of thespian banter one typically expects from an actor.

“It’s very boring to hear actors talking about being actors,” he grins. “It sounds a bit wanky and reductive, even when it’s not really. And I don’t think people care about any of that stuff.”

And here comes the mot juste : “The last thing I want, as an actor, is to be taken seriously.”

We shouldn’t be too surprised to discover that Scott has a knack for sounding like Oscar Wilde. His career has always pointed towards a literary bent. The Bafta-winning, Dublin-raised actor first graced our screens in 1996, in Cathal Black’s adaptation of the John McGahern short story, Korea . Since then, his career has taken in various radio and book readings, touching on Henry James (The American), James Joyce (Nora and Ulysses), Kurt Vonnegut (Slaughterhouse Five) and F. Scott Fitzgerald (The Great Gatsby).

Perhaps inevitably, his first major studio picture is Frankenstein with James McAvoy and Daniel Radcliffe. The Paul McGuigan adaptation is scheduled for release next year.

“It’s for 20th Century Fox and it’s the first time I’ve worked for a big studio,” says the 37-year-old. “It’s me though. I think. Because I actually get to do some acting in it. It’s not just playing a character . . . if you see what I mean.”

Andrew Scott grew up in Dublin, where his dad worked at an employment agency and his Omagh-born mum was an art teacher. He was, he says “very, very shy” during his time at Gonzaga College, except, of course, when he was on stage.

“I did some drama classes. I did little things where you’d end up wearing your mum’s coat the reading an extract from Richard III. But I learned everything I know from doing the Féis,” says Scott. “The sun would be streaming through the windows into a room with six mums and one adjudicator who kept hushing everyone even when they weren’t making any noise. And if you could create some sort of atmosphere in that hall, in the middle of 70 kids reading the poem My Daddy Fell into the Pond , well, that’s as good a training as you’ll find.”

With a couple of commercials to his name – yes, including that porridge one – he read Drama at Trinity. Sadly, his university career was not to be.

“You know the dread phrase: ‘You need something to fall back on’?” asks Scott. “It wasn’t for me. I was never going to be an academic. I loved the stage. But couldn’t get along with the semiotics. So when an opportunity at the Abbey came up . . .”.

Did the fact that it was a gig at the national theatre offset the disappointment for the parents hoping for “something to fall back on”?

“Er. No. It really wasn’t okay. They were supportive but not thrilled.”

At 19, Scott’s career looked to be snowballing into something huge. The hits just kept on coming: Long Day’s Journey into Night at the Gate for Karel Reisz, Conor McPherson’s Dublin Carol at the Royal Court Theatre, his first Olivier award for A Girl in a Car with a Man in 2004, the Pulitzer Prize-winning Dying City , centring on the twin characters the actor originated, a Drama League nod for his Broadway debut opposite Julianne Moore.

Scott, it is said, is a heavily decorated theatre actor who does TV and film between roles. He doesn’t entirely agree: “I think the other work has always been there,” he insists. “The first job I ever got was Korea . All the work coexists equally in my mind. Maybe people think that because I talk more about theatre.”

Or maybe it’s because it’s so hard to figure out what on earth is going on with his screen career. When Andrew Scott says he wants to be “a successful actor not a famous one”, he really means it. A private chap, he’s gay without fanfare and publically recognisable without being terribly public.

“I’m not on Twitter or anything,” he notes with a little shudder. “I don’t like the idea of having followers. It all sounds a bit sinister to me.”

Skipping between tiny roles and headlining parts across a wide range of sensibilities, genre and budget – Band of Brothers , HBO’s John Adams , Ken Loach’s incoming Sligo drama Jimmy’s Hall – Scott moves in mysterious ways. What are you up to, Andrew?

“Ha,” he exclaims, rubbing his hands in mock delight. “I’m pleased to hear that. Because that’s exactly what I’ve wanted to do. I’ve always thought you should be as fluid as possible as an actor and not get stuck in one place. That has become harder recently.”

We hardly need to explain the whys and wherefores. BBC’s Sherlock has changed everything for Scott. His Bafta-winning depiction of Holmes’s arch-nemesis Moriarty has left the actor a little more centre stage than he is accustomed to.

“It has worked out well for everyone and I’m genuinely delighted by how people has responded and become attached to it,” he says. “It appeals to young people when a lot of TV doesn’t. It’s a really good show.”

Good enough, in fact, to bring industry heavyweights a-courting. He has had brushes with Hollywood before: look closely and you’ll find him as long ago as 1998 in Saving Private Ryan. Going big, however, is not for Andrew Scott.

“I had an opportunity to do a big American thing recently,” he grins. “I don’t want to say what because that wouldn’t be nice for the person now playing the part. It’s really interesting actually. Because I ended up finishing with my management over it. I can totally understand why they wanted me to do it. But to commit six years of your life to one thing?

“We’re not here all that long. I didn’t respond strongly enough to the material. It had appeal in that it was higher profile and more money. But really. I’d rather spend my time on material I love. I’m not going to do some schlock TV show for money and profile.”

Post-Moriarty’s “suicide”, Scott signed up for some weighty theatre: “I did a big stonker of an Ibsen play and it really took it out of me. Plus, after Sherlock I had to take stock and figure out what I wanted. I needed some time. And then I ended up in five films in the past 12 months, two of them in Ireland. ”

Was it discombobulating coming back to work here after all those years in the UK?

“Well, the thing is, there are things about Dublin I know like the back of my hand. Like the number 62 bus route. Or all those strange Americanised, dated shopping centres on the Southside. No matter how long I’m gone, I immediately reconnect with all that stuff. And I’ve always come home every six weeks or so to see the family.”

Andrew Scott fans should be on red alert this weekend as The Stag opens at a cinema near you. Though billed as the Irish answer to The Hangover , John Butler’s likeable comedy trades in metrosexualism where other bromances have only machismo. Ireland’s sweetheart Amy Huberman may be the bride, but she takes second billing to Scott and Hugh O’Conor as the two pals stumble through the latter’s stag weekend.

“Comedy is hard,” says Scott. “Most acting is about ambiguity. It’s thinking ‘Do I mean this or that?’ Comedy has no room for ambiguity. It’s making 700 people in a cinema laugh.”

Still, we shouldn’t expect the actor to up sticks and leave his London home behind any time soon. “I’ve lived and worked in New York,” he says. “But London is, culturally, the best city in the world. The theatre is dynamic. The culture is dynamic. Even the skyline is dynamic.”

And we definitely shouldn’t expect to see him going Hollywood. “You have to be strong enough to say no as an actor,” says Scott. “It’s scary. Because when you’re in your 30s you want to be able to pick up the cheque sometimes. And turning down any opportunity is scary for any actor. But, lofty as it sounds, all you have are your choices. I’ve met movie stars who feel trapped into doing the same thing over and over. Based on the assumption that that’s what people want. That’s just not for me.”