In the Fade: Diane Kruger marries her former dope dealer 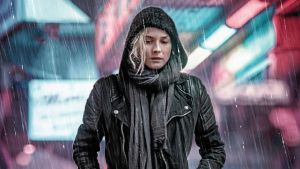 Film Title: In the Fade

You wouldn’t say the films of Fatih Akin are hugely subtle. Titles such as Short Sharp Shock and Head On do little to conceal his robust approach. Focused largely on Turkish communities within Germany, Akin’s films hook you by the nose and drag you through escalating levels of pain, trauma and dislocation. You know you’ve seen a movie by the close.

In the Fade shows him at his very best and his very worst. The director has always drawn out strong performances and Diane Kruger, emotionally pummelled throughout, earned her best actress award at the 2017 Cannes film festival. There are gut-wrenching moments of tragedy throughout.

But In the Fade also features some raw characterisation and an ending that stretches plausibility to breaking point. You will rub your eyes before rolling them so vigorously you’ll risk a hernia.

In the Fade trailer

It begins rather brilliantly. Kruger plays Katja, a determined young woman who, against all her family’s advice, marries Nuri (Numan Acar), a Kurdish man, her former dope dealer, while he is still in prison. They show the world. Nuri pulls his life around, gains qualifications and secures work in the Kurdish community. Katja’s world is then literally blown apart when a bomb kills Nuri and their young son. The police initially suspect drug traffickers, but, after various complications, a pair of neo-Nazis are arrested for the crime.

To this point, the picture has been a model of controlled anguish. Kruger weaves the character’s despair into every muscle and every tortured sigh. The script offers interesting satellite tragedies: the suspect is grassed up by his clearly devastated father. As ever, Akin shows a real feel for Germany’s more awkward corners and, in the grating score by Josh Homme, he has the perfect accompaniment to his muddy, rain-damaged aesthetic.

Sadly, the trial is staged with a melodramatic crunch that would not be out of place in a Latin American telenovela. The defending counsel is not just worryingly efficient; he’s a cackling maniac who seems permanently on the point of tying Kruger to the tracks before a hurtling locomotive. What happens after the trial nudges us further still into armpit-fanning hysteria.

Still, In the Fade is never less than gripping. At Cannes last May some wondered if neo-Nazis were still such a threat. Events a few months later in Charlottesville confirmed the film’s uncomfortable relevance.

In the Fade opens on Friday, June 22nd