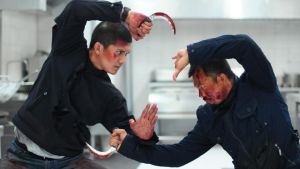 You would have trouble arguing that Gareth Evans’s The Raid – a modern classic of martial arts cinema – was any sort of delicate flower. An unacknowledged descendent of Donkey Kong, the Thai film followed a police squad as it battered its way up and down the stairs of an apartment building in Jakarta. But there was a beautiful simplicity to the concept. Complicate things for the sequel and you risk compromising the budding franchise’s reason to exist.

There is a great deal of good news. The Raid 2 features a series of action sequences that is unlikely to be bettered this year. Working closely with Uko Iwais, his star and choreographer, Evans has developed a style that values spectacle, structure and brutal rhythm.

There’s a delightful cheekiness to the way Evans lays out the ideal surroundings for an afternoon squabble: when a party of antagonists descend on a muddy, rain-drenched exercise yard, anticipation is raised for a full exploitation of conditions.

And so it proves. In one of many, many long shots, the camera rises up, allows the participants to pass beneath and licks its lips in anticipation of slippery mayhem. The team never tire of finding inventive ways to unleash such havoc. The already famous (notorious?) hammer fight on a train is as beautiful as it is horrible.

Throughout it all, Evans maintains that odd balance between heightened reality and fantastic invention: the bloody, viscera-spouting blows really look as if they hurt, but the fights retain the balance of tightly choreographed ballet.

Now the bad news. The director has mounted these consistently excellent brawls – as good as those in part one – within an enormous superstructure that slows the vessel down to a sleepy crawl. Employing Standard Yakuza Plot #165, the film send Rama (Iwais), hero of the opening salvo, undercover to investigate some boring conspiracy or other.

Over an aching two and half hours, half-assed twists and humdrum reversals – about which even the actors fail to seem interested – pile up to quite suffocating effect. Imagine a late Marx Brothers film featuring twice as much warbling Zeppo as wise-cracking Groucho and you’ll have some idea what to expect. For once we hope the director’s cut is an hour shorter.