The Lonely Battle of Thomas Reid: The Kildare man who wouldn’t sell his land to the IDA 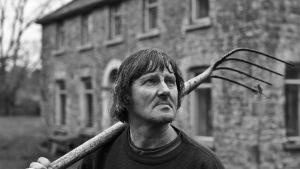 Deep into Feargal Ward’s fascinating, often beautiful documentary (or is it a “documdrama?”) the title character, an eccentric, determined cattle farmer, stomps about Kildare to the strains of The Boomtown Rats’ Looking After Number One.

The tune is there to remind us that Reid seems culturally stalled in the 1970s and 1980s. Earlier, digging through piles of VHS tapes, he tried to recall the main characters in Dallas. He has some trouble bringing Bobby Ewing’s wife to mind. “She’d be a sister of Cliff Barnes,” Reid ponders before landing on “Pamela”.

The song is surely also there to highlight the moral quandary at the film’s core. Thomas Reid was the stubborn individual who, in the middle part of this decade, refused to sell a hunk of land, earmarked for “strategic industrial development”, to a dumfounded Industrial Development Authority. Few news pieces avoided mention of both David and Goliath.

A casual conversation here reveals that the land – 72 acres and a listed home, according to this newspaper – is worth many millions of euro. It is, thus, hardly fair to accuse Reid of selfishness; he could retire in relative luxury with even a fifth of the sum mentioned. But he is causing inconvenience for a great many people and, if the authorities are to be believed, hindering the creation of more than a few jobs.

The film is very much on his side. Passing conversations reference the clash between utilitarian good (not how one would immediately think of the IDA) and the right to private property (not the first plank in any socialist platform).

But Ward’s picture remains unconditionally besotted with this stubborn, brave rebel of the old school.

The language used by the officials in restaged conversations drips with phrases that seem chosen to deflect understanding. They are particularly fond of “appropriate”, a word now promiscuously used by both left and right in place of “correct” or “good”.

It has been decided that these are “appropriate lands” for development. Later on, as the case reaches the higher courts, some manoeuvres are uncovered that we won’t summarise for risk of further interesting m’ learned friends.

The officials and lawyers are suited, formal, buttoned-up (and, we should fairly add, played by actors). Thomas Reid is informal, defiant and properly odd. Ward and his team have a tricky line to tread here.

Few people watching The Lonely Battle of Thomas Reid will resist the odd smile at our protagonist’s singular habits. He phones up a radio station to request a medley of songs all titled Heart and Soul. The interior of his house is clogged with newspapers, videotapes and Neolithic vinyl records. His hair shaggy in the style of a mop-top that’s been left too long untended, he potters about in a state of defiant introversion.

But there is never any sense that we are being invited to laugh in his direction. Like the heroes of the Maysles brothers’ famous Grey Gardens, he emerges as a personality of brave originality.

Not everything works. The restaging of the final court case in the land outside Reid’s house feels just the tiniest bit arch. But the film is otherwise a technical marvel. Ward’s own camera offers sharp contrast between the industrial complex looming near Reid’s land and the farmer’s own unglamorous habits.

A drone flies over the former during the opening titles. We then cut to interiors hewn from the darkest shades of a less ordered Rembrandt: Thomas’s chaotic, cluttered home.

Scenes of him caring for a young calf lead onto depictions of the more brutal side of farming. Two worlds exist in parallel. Neither has, at time of writing, encroached significantly on the other.