The Irishman in a field in England

Having spent his 20s “floating around” Belfastman Michael Smiley was a late-comer to acting. He talks about his role in Ben Wheatley’s radical new English Civil-War film 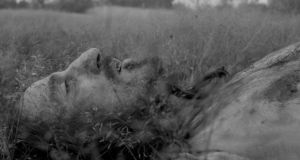 As Ben Wheatley’s radical Cromwellian drama opens, two front line deserters (Peter Fernando and Julian Barratt) form an unlikely alliance with a lace-making, lily-livered alchemist (Reece Shearsmith). As the triumvirate move away from the battle in search of an alehouse, their intellectual companion continues to watch out for someone. Or something. His quarry, it transpires, is the fiendish O’Neill, a mercenary with a talent for dark arts. “It makes sense that the devil is an Irishman,” says one of the captured men as O’Neill puts them to work.

It makes equal sense that O’Neill is essayed with plenty of sulphur and menace by Wheatley regular Michael Smiley. “Ben has been talking about this one since before Kill List,” says the Belfast-born actor. “It’s a fascinating period. Even without the Irish question. You have politics and religion and magic and civil war. I never knew all that much about Roundheads and Caveliers beyond Cromwell’s tetchy relationship with Ireland. Whenever I’ve heard English people mention it, every time I sit up and listen. I’ve always thought it was interesting.”

In keeping with the lesser seen Albion of Kill List and Sightseers, Wheatley’s psychedelic history, A Field in England, reimagines the 17th century as a battle between good and evil by way of Alejando Jodorowsky’s El Topo.

“What Ben does is totally radical,” says Smiley. “In Ireland we’re still close to our legends and mythology. We have sagas. We have the Gaeltacht. There’s a strong relationship between our history and mythology. That’s lost in England. It’s unfortunate because their mythology – like the George’s Cross – has ended up in the hands of right-wing nationalists, and it’s even more unfortunate because England has always relied on multiculturalism. Even the skinhead look was borrowed from Barbardos and Ska music.”

At 49, Smiley is – at last – the hottest ticket in the Brit-flick industry. A late bloomer as a thespian (and stand-up comedian), he had worked as an acid house DJ and a cycle courier before, in the 1990s, his then flatmate Simon Pegg asked him to appear as head-the-ball Tyres O’Flaherty in the hit TV series Spaced.

“At that point I had already done a few Edinburgh Festivals and tours and one-man plays,” says Smiley. “Mostly the characters and stories were based on my own experiences, because I’m Irish and because my dad always said: ‘Tell the truth – it’s easier to remember.’ I was living with Simon and Nick [Frost] just when Simon and Jessica [Stevenson] were working on Spaced. At the time I had a reputation for mood swings and for being a raver. So they asked me if I would do a character that was a bit like me. And that’s when it started. I had spent my 20s just floating around and trying to pay the bills and looking after two kids. And suddenly I had a whole other career.”

Official Trailer for 'A Field In England'

He subsequently shared sets and screen time with Natalie Portman on The Other Boleyn Girl and Dustin Hoffman on Perfume: The Story of a Murderer. A regular on the TV series Luther, Smiley has repeatedly teamed up with Wheatley (Down Terrace, Kill List) and Pegg (Shaun of the Dead, Burke and Hare and the latest The World’s End).

“I grew up in a working-class estate on the outskirts of Belfast when there were no prospects and no employment,” he syas. “Acting wasn’t for the likes of me. Going to Rada wasn’t something I ever thought about. I had a lot of catching up to do. I don’t know any shortcuts. With stand-up you do your apprenticeship, you find your voice, you find the subjects you want to talk about. With acting you’re thrown into different stories and different rhythms every time. Growing up I was a high-energy wee lad running mad. I still have that energy, and now I have somewhere to put it.”

In keeping with the actor’s autobiographical Fringe shows Confessions of a Catholic Buddhist and Re:Cycling, his life appears to have been fairly random in its progression. Does he generally fall arse-over-tit into employment opportunities?

“I think a lot of people do. I think most lives don’t happen according to five-year plans. You take this turn or that turn. And the stars align. And you’re off on another path. Random is good. If you keep on going and enjoy life then it’s never a waste.”

A Field in England, in keeping with its star’s philosophy, is a radical new venture. From today the film will be available on multiple-media formats – cinema, TV, video-on-demand.

“I think every time the Tories get into power and start putting the squeeze on, something happens,” says Smiley. “That’s where punk came from. That’s where acid house came from. That was good for me because that way I got to spend time chilling out on sofas listening to all these hopes and dreams. And now it’s happening with film. All these people are realising they can make their own movies on their laptop, upload them to YouTube and publicise them on Twitter. Anything is possible. And A Field in England is testing that out.”

Speaking of Twitter, the father-of-four did tweet up something of a storm when his domestic partner Miranda Sawyer tuned into Glastonbury last weekend.

“I found myself shouting ‘No!’ Get it off!’ I used to go to Glastonbury in the ’80s. I went about 10 times. And I’ve performed there. It didn’t used to be a convenient place for Beyoncé to start or end her world tour. The idea of f*cking Bruce Forsyth performing at Glastonbury back then. The idea of bus-pass age Rolling Stones shuffling around. When the camera pans out into the crowd is a bunch of white middle-class kids. It’s like springbreak for Oxford and Cambridge. I love The Rolling Stones. I just don’t need to see them now. My grandmother was a wonderful woman who gave birth to 15 kids. I don’t need to see her on a stage with her legs slightly splayed to prove it.”

yyy A Field in England is showing at the Light House Cinema in Smithfield, Dublin