The Hunger Games: Mockingjay Part I review - halfway decent, then it leaves you hanging 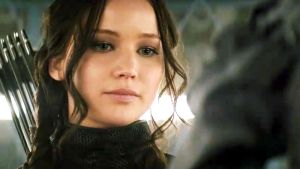 Jennifer Lawrence in The Hunger Games: Mockingjay Part I

Whether we wanted it or not (I’m saying “not”), we have, over the last five years, seen the development of a new genre of film. Harry Potter and the Deathly Hallows Part I introduced us to the holding-pattern, bifurcated money-grab. Since then the Twilight, Divergent and Hunger Games series have all taken the opportunity to split closing episodes into unnecessary segments.

It’s a shame that the Hunger Games folk were unable to resist the temptation. As legions of lesser copycat YA adaptations devalue the brand – yes, I’m looking at you, The Maze Runner – it’s easy to forget quite how beautifully made this series has been. We rejoin the action with Katniss Everdeen (Jennifer Lawrence) transported to the rebel headquarters in mysterious District 13. President Coin (a silvery Julianne Moore) has decided that our heroine, famous for an act of televised rebellion, is to become the living figurehead – or Mockingjay – of the revolt against generic dystopian tyranny. Assisted by Plutarch Heavensbee (Philip Seymour Hoffman, leaving us in poignant stages), she outlines a plan to sell Katniss to the masses. Staged propaganda films don’t quite work, so she is sent out to engage in active combat.

Other complications spiral forth as surviving regulars make their appearance. Haymitch (Woody Harrelson) isn’t as drunk as he once was. Effie Trinket (Elizabeth Banks) now looks a great deal less camp than she sounds. The credits make it clear that, whatever Katniss may initially believe, Peeta (Josh Hutcherson) is still around to act as an ambiguous love interest.

Suzanne Collins’s source novel sequence doesn’t have much to say that hasn’t been said by Huxley, Orwell, Wells and a hundred other futurologists, but there is a seriousness of purpose to the Hunger Games that is sorely lacking from its recent imitators. Shepherding an impressive mess of contradictory adjectives – strong, vulnerable, charismatic, ordinary – Lawrence again justifies her status as the most electric star of her generation.

Unfortunately, the demands of holding-pattern, bifurcated money-grab overpower efforts to fashion a satisfactory plot. We can live without the tournament that gives the series its name. (After all, the titular diamond appeared in only the first Pink Panther film.) But the penultimate episode in the franchise feels like the mighty inhale that precedes a noisy, explosive sneeze. We must wait another year for release.

Patrick Freyne on Love Is Blind: It’s Gilead, Love Island and Blind Date rolled into one
10