The Girl on the Train review: Emily Blunt overpowers in more ways than one

The official trailer for 'The Girl on the Train', starring Emily Blunt. Video: Universal Pictures 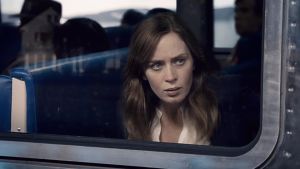 Emily Blunt in The Girl on the Train

Film Title: The Girl on the Train

In one of the several flats that poor drunk Rachel Watson (Emily Blunt) inhabits miserably in this diverting thriller, we spot, positioned conspicuously behind her left shoulder, the box for a “1,000-piece” jigsaw puzzle.

Do adults still own such things? It feels a little like a pounding visual commentary on the entertainment itself. If so, the gag says more than the film-makers intended.

There is a great story here. Paula Hawkins’s best-selling novel offers agreeable feminist critiques – “What is it with you crazy women?” one bastard says – while spinning out a melodrama that works hard at tying up its loose ends.

The problem is in the telling. Failing to translate a literary technique into film, the picture really does remind one of a jigsaw puzzle. Pieces are scattered randomly about the table and then hammered together in an unsatisfactory order. As is too often the case these days, somebody needed to tear the source material to shreds before embarking on the adaptation.

This is not to say the film-makers haven’t taken liberties. The story has been moved from London’s commuter belt to Westchester County in New York (the same rules apply there, so fair enough). A washed-out, overweight wreck in the book, Rachel steps forward in the brisk, healthy frame of Ms Blunt.

Emily, English accent intact, does occasionally wear no-make-up make-up. She pulls on jumpers that you wouldn’t wear to a job interview at Burger King. But, rather than looking hammered hollow, she gives the impression of a pretty healthy woman who’s just stood on a Lego brick.

What we have here is a multi-stranded variation on Agatha Christie’s 4.50 From Paddington. Following an unhappy divorce from Tom (Justin Theroux), Rachel now spends much of her day staring angrily out the train window while trundling past her old home on the way to New York City. When not fixating on Tom’s new wife Anna (Rebecca Ferguson), she fantasises about the apparently ideal life enjoyed by their neighbours Scott (Luke Evans) and Megan (Haley Bennett).

One day, she sees Megan with another man. Shortly after that, the neighbour goes missing. Rachel, prone to drunken blackouts, has been making nuisance calls to Anna, and Detective Alison Janney – a daunting notion, you’ll agree – wonders if the protagonist may have assaulted Megan thinking her to be the other woman. Still with me?

It’s a well-organised set-up and Hawkins has worked hard at delivering on its promise. Cinematographer Charlotte Bruus Christensen, who did such good work on Far From the Madding Crowd, makes nice contrast between the gleaming suburban homes and the shadowy woods that abut civilisation.

The characterisation is shallow, but it is stirring to experience a marquee thriller that concerns itself largely with female characters. Unfortunately, the structure of the piece undermines its ambitions as a mystery yarn. The book told its story from three different points of view: those of Rachel, Megan and Anna. The conceit is honoured in the opening scenes by imposing each name on the screen before the relevant character is introduced.

But that sense of discrete perspectives breaks down almost immediately. The film is called The Girl on the Train. The story is triggered by Rachel’s early observation. Blunt is by far the most charismatic of the three female leads. As a result, those unfamiliar with the novel will insist on seeing the story through Rachel’s eyes and will expect her to solve most of the mysteries.

Instead, the movie seems, in the last act, to throw solutions and explanations at us in random fashion. Miss Marple wouldn’t approve.

We’ll say it again. Faithfulness to the source is not a virtue in itself.