Arthur Ransome was an interesting guy and a good writer. But nobody still capable of walking upright will be interested in these creaky adventures. Right? 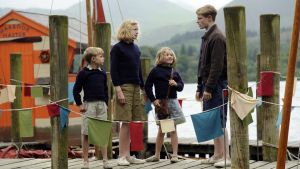 Tally ho! The Swallows ship out in Swallows and Amazons

Tatty, Batty, Lattie and Philippa piled a mound of sandwiches into the good boat Farage and set sail for the BBC.

“This is going to be smashing,” Philippa said. “Auntie’s house may be packed with Bolshies and Muhammadans, but even she can’t resist forking out for Arthur Ransome’s top-notch tale of posh kids patronising the oiks while holidaying in the Lake District. It will look scrumptious. We’ll get some yummy music by Ilan Eshkeri. Who cares if many of the kids can’t act for toffee?”

While she had been talking, a suspiciously swarthy fellow in a poorly tended skiff had pulled up to their starboard side.

“Who are you?” Tatty (who used to be called Titty) said in a voice superior enough to strip the paint from lower-order walls.

“I’m from the 21st century,” the strange man said. “Look, Ransome was an interesting guy and a good writer. But nobody still capable of walking upright will be interested in these creaky adventures. Right? What’s all this ‘walk the plank’ stuff? You may as well make a film of the 1930 Wisden’s Cricket Almanac.”

Philippa couldn’t understand a word the man said. Impossible as this seemed, his accent gave no clue to his class whatsoever. Still, his disapproval was clear. She narrowed her eyes and spoke in the voice she used on Buster that time he chewed up her Latin primer.

“It will be wizard. We’ve replaced the burglars with spies. And to keep the BBC Commies happy, we’ve put in a bit that suggests we shouldn’t really be invading other chaps’ countries. ‘Post-colonial’ you call it.”

The man smiled a terrifyingly classless smile. “Not sure how well that will go down after Brexit,” he said.

Philippa pushed him into the water and sailed off boringly towards a future bank-holiday screening on BBC2.