Ice Cube has produced a celebratory account of his influential 1980s rap group NWA. The result is pulsating if somewhat airbrushed biopic 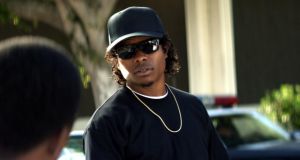 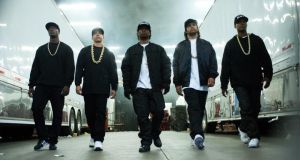 An hour or so into this propulsive biopic of NWA, Ice Cube (played by the rapper’s real-life son O’Shea Jackson, Jr) wheels out the slippery argument that the group’s lyrics should be seen as guerrilla journalism.

NWA’s music did serve that purpose, but (unlike, say, Grandmaster Flash’s socio-realist The Message) NWA’s brilliant early records also traded on the dubious glamour of street violence. It was the sort of journalism that kids of all races could shout along to while driving their cars in endless drunken circles.

The film often treads similarly murky areas. We do get insight into the social decay that fuelled the most fecund musical movement of the mid-1980s. One telling representation of police harassment – the guys are pressed to the ground merely for occupying a street corner – leads directly into the recording of the perennially controversial Fuck the Police.

Messier, less easily romanticised stories are shuffled towards the wings. The film’s US success has been somewhat overshadowed by allegations concerning Dr Dre and violence against women. Straight Outta Compton offers dispatches from the front, but it also prints more than a few sanitised legends.

However, as a celebration of how social unrest triggered great music, the film does earn a deserved place alongside the recent Good Vibrations. In one area, that study of the Northern Irish punk scene betters Straight Outta Compton. The 1988 track that gives F Gary Gray’s film its title – among the most arresting of the decade – sneaks out in disappointing spurts and gurgles when it deserves the startling, joyous reveal that Teenage Kicks enjoyed in Good Vibrations.

Those concerns and reservations noted, it must be admitted that Straight Outta Compton has earned its rampaging success. We begin with a storming sequence in which the sometime Eazy-E (Jason Mitchell) runs into trouble while negotiating a drug deal. Elsewhere, Dr Dre (Corey Hawkins) and Ice Cube are homing their respective talents as impresario and rapper. (As has been the case for 30 years, MC Ren and DJ Yella struggle to hold the limelight.) Initially a facilitator, Eazy reluctantly gets behind the microphone and generates the defining Boyz-n-the-Hood.

This being a film about the music industry, the guys are soon introduced to an ambitious, but ultimately dubious, manager and set about changing the world for 25 per cent less than they deserve.

Paul Giamatti is first class in the Paul Giamatti role. His version of Jerry Heller, the man who sold NWA to the world, is much less unpleasant than his take on Eugene Landy in the recent Brian Wilson biopic Love & Mercy, but he has great fun with the manager’s sudden willingness to take offence when he becomes the target of Cube’s hip-hop disses.

The film is, of course, really about the relationship between the three main talents. The spit of his dad, Jackson comes across as the cool rational centre of the trio. Hawkins’s performance allows Dre to slowly evolve from irresponsible young dad to a new kind of mogul. Mitchell’s Eazy doesn’t live long enough to grow up.

Much of this extraordinary LA story really does deserve to be presented as legend. One superb setpiece sees the group, at the height of their success, defy attempts at censorship and belt out Fuck the Police to a grateful Detroit. The murderous squabbles with Suge Knight, proprietor of Death Row Records, take on the quality of funky footnotes to a near-contemporary I, Claudius.

Holding it all together is clamourous music that achieves something pop so rarely manages: it is urgently of its time and endlessly influential. You can’t often say that about journalism.

My dad the spy: Stewart Copeland on his father’s secret life as a CIA agent
3