‘Somebody has to play Martin Luther King. Why not me ?’ asks David Oyelowo

David Oyelowo, a familiar face from film and TV, had to transform himself to play Martin Luther King jnr in ‘Selma’. Now, with backing from Oprah Winfrey and Brad Pitt, the film has propelled the British actor into the limelight with the role of a lifetime

This week, Donald Clarke is counting jokes in 'Shaun The Sheep Movie', while Tara Brady looks at 'Selma', one of the first major movie biopics of Martin Luther King Jr. And why was the release of 'Jupiter Ascending' delayed? Video: Niamh Guckian 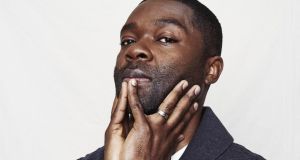 David Oyelowo: “When I first read the script, in 2007, my reaction was spiritual. I felt a call of God that I was going to do this.” Photograph: Bon Duke/New York Times 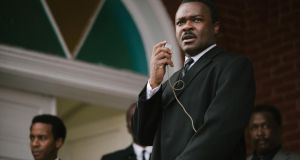 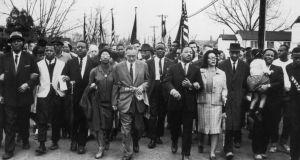 Having watched Selma, it’s impossible not to do a double take when David Oyelowo walks into the room. He is a svelte, youthful-looking 38-year-old, so his transformation into the broad, perennially troubled-looking Dr Martin Luther King jnr for Ava DuVernay’s powerful historical drama is not simply impressive: it’s downright discombobulating.

It hardly needs to be said that a lot of eating was required. But there’s more. It’s as if Oyelowo somehow rearranged his own molecules to effect King’s stately presence and barrel-chested baritone.

All that gravitas might have weighed heavily on another actor. But Oyelowo, the son of Nigerian immigrants, was protected, he says, “by maybe a little bit of naivety” and by a touch of divine intervention. “When I first read the script, in 2007, my reaction was spiritual,” he says. “I felt a call of God that I was going to do this. And that – what I would call a divine quality – never left the project.”

He may be right. There is a sense that stars were aligning for the film, although they did take their own sweet time about it. In 2008 the project hit a speedbump when the director Lee Daniels passed on Selma in favour of The Butler. Oyelowo (whose surname is pronounced oh-yellow-oh) was subsequently drafted into that picture alongside Forest Whitaker and Oprah Winfrey.

“Lee Daniels had already cast me as Dr King,” Oyelowo says. “But we couldn’t get Selma off the ground.” Winfrey would ultimately come on board as a producer, along with Brad Pitt.

“I already had the role in The Butler. And I walked in the auditions and she said, ‘Oh my God, it’s such an honour to meet you.’ And I thought, What is going on? Why would you say that? You’re Oprah. But she’s a friend of George Lucas. And she had seen me in Red Tails. Since then our friendship has become genuinely deep and meaningful. There’s nothing presumptuous about her. She’s completely disarming. She saw enough of Dr King in my first audition tape to say, ‘I truly believe this is part of your destiny, and I’m going to do everything I can to help you get there.’ Once she came on board we really started firing on all cylinders. She’s the reason Selma got made.”

There was another fateful meeting: in 2011 Oyelowo had just started making a splash across the Atlantic, with a series of supporting roles in Rise of the Planet of the Apes and The Help, when he found himself on a flight beside a film investor, who handed him the script for Middle of Nowhere. The film, made over nine days for $200,000, was written and directed by DuVernay. It premiered at the 2012 Sundance Film Festival to critical wows and a directing award.

“She is as good a film-maker as I ever worked with, and I’m grateful to have worked with some great film-makers,” says Oyelowo. “She has a remarkable voice. She’s as good with the silences between words as she is with words. She allows characters and moments to breathe. I think a lot of the time people are obsessed with narrative and driving the story forward. How much information can we pack into an hour and a half? And I always knew that, in playing Dr King, that the most satisfying and revelatory thing for an audience would be finding the man behind the words.”

Oyelowo lobbied for DuVernay to get the job, adding a further poignant dimension to already powerful material. “I think the fact that she is directing this film is so perfect given that women were marginalised within the civil-rights movement itself. It’s a beautiful subplot to the movie. Women, especially black women, are marginalised in Hollywood. She embodies the realisation of Dr King’s dream.”

No Bafta, no Oscar

Much has been written about the shocking omission of Selma from both Bafta and Oscar shortlists. It’s a curveball, even by the Oscars’ erratic standards. But one suspects Oyelowo will take it in his stride. “I learned early in my career that you can’t take anything for granted,” he says. “There is no destination; there is only the journey. It’s such a subjective profession, and you don’t know what is going to take. This is just another moment. It’s a fantastic moment. But it’s all about what’s next. My view has always been that good work begets good work.”

It tempting to see Oyelowo’s Hollywood rise as part of a greater British invasion. Selma, it should be noted, also features Tom Wilkinson as Lyndon B Johnson and Tim Roth as Governor George Wallace.

As we meet, Oyelowo has just come from a photo shoot with Eddie Redmayne and Benedict Cumberbatch. The actors know each other, of course. Redmayne and his Theory of Everything costar Charlie Cox almost ended up on Oyelowo’s couch when they arrived in Los Angeles. Cumberbatch attended the London Academy of Music and Dramatic Art just a few years behind Oyelowo, and they have shared screen time.

“I remember one of his first jobs was with me on Spooks,” Oyelowo says. “Myself and Matthew Macfadyen were interrogating him. He was like, ‘Oh, this is cool.’ He wasn’t so green by the time we shot Small Island [in 2009]. And we have all seen each other in small plays over the years.”

Oyelowo suspects the American vogue for British actors is a happy byproduct of the theatrical tradition. “We cut our teeth in front of the Donmar or the National or a small pub theatre in north London; the audience will let you know if they think you’re telling the truth. You really learn your craft by doing that.”

But, unlike Cumberbatch, Oyelowo does not hail from an acting dynasty. Nor did he attend Eton, like Eddie Redmayne. Instead his mum, who worked for British Rail, and his dad, who worked for British Airways, sent the younger David to boarding school in Nigeria. “Moving from Nigerian culture, where I was for seven years, back to the UK and then on to America means I know what it is not to be a minority. That actually really changes your world view and your perception of yourself. Because if a minority mentality is something that’s wired into you, that affects how you go about your day. Whether you’re a woman. Whether you’re a black person. Whether you’re disabled. If you know the opportunities aren’t there, that requires you to be combative. It changes your disposition. Being outside of a minority group has helped me to grab opportunities. Somebody has to play Dr King. Why not me?”

It was ever thus with Oyelowo’s career. In 2001 he became the first black actor to play Henry VI at the Royal Shakespeare Company. “It was a really big thing for my dad,” he says. “My parents came to Britain in the 1960s and were very aware of racism. When I started acting it was very left field for them. And they were worried that there just wouldn’t be opportunities for me.”

Having established himself as a fixture on the BBC, in such projects as Spooks and The No 1 Ladies’ Detective Agency, Oyelowo and his wife, Jessica, relocated to Los Angeles, where he has found steady work with some big names, appearing in Steven Spielberg’s Lincoln, Lee Daniels’s The Paperboy and Christopher Nolan’s Interstellar, as well as alongside Tom Cruise in Jack Reacher.

Still, Selma has propelled him into the limelight like never before. “I was just in New York for the premiere,” he says. “I couldn’t believe the furore. I’m used to walking up the red carpet quietly. I must look like a child who has had his toy stolen in every photo.”

The race issue ‘Everything in America is amplified’
“I wouldn’t say Britain is less polarised in terms of race,” Oyelowo says. “It’s just that everything in America is amplified. I think guns amplify, I think the press amplifies, I think the size of the country, the history of racial politics – especially in terms of slavery – just means that the megaphone on events like Ferguson is louder. In Britain it’s very tough for a cop to kill a person, because our cops don’t walk around with guns. But that doesn’t mean that prejudice doesn’t exist.”