Review: An enigma wrapped in a historical drama, this is one to admire and puzzle over 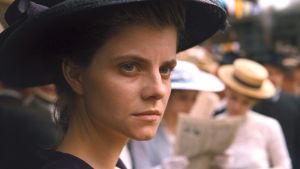 László Nemes reunites with Son of Saul co-writer Clara Royer for this sumptuous, sibylline account of the last days of the Austro-Hungarian empire.

It’s 1913, Budapest, and Írisz (Juli Jakab) makes her way to the ritzy hat shop that still bears her family name: Leiter. She has designs to show to the current owner, Oszkár Brill (Vlad Ivanov). He offers her a first-class ticket home.

Her name immediately startles all those who hear it. Her parents perished in a fire on the site of the shop when Írisz was still an infant. There are rumours that she may have a brother, who may have started the blaze and who may have viciously murdered a count.

From Brill to the skulking stable hand, characters shift disconcertingly from benevolent to inscrutable to downright menacing from scene to scene. There are odd, archaic rituals with occultish undertones: a dressing room that was bricked up since a visit by a princess is knocked through. There are shades of Lucile Hadžihalilovic’s Innocence in a strange dance for young shop girls – an event that, for all we know, may end in marriage or in ritual sacrifice.

Irisz’s uncertain investigation brings to mind the inquisitive heroines of Pynchon’s The Crying of Lot 49 or Bleeding Edge. Her mission is unclear and each new development only adds to the nerve-wracking intrigue.

As with the director’s devastating portrait of a sonderkommando at Auschwitz in Son of Saul, cinematographer Mátyás Erdély stays unnervingly close to the heroine of Sunset during long, exquisitely choreographed takes. The sun-drenched golden tableaux that punctuate the close-ups are deliberately left hazy, adding to the general obfuscation.

Juli Jakab gives nothing away: her face remains focused, curious and Sphinxlike until the final beat. She is all things to all ideologues. A strange coda set in the trenches of the first World War suggests Sunset is a parable about class struggle, but the deliciously enigmatic screenplay lends itself to multiple readings.

The many sinister male hands steering Írisz towards and away from danger indicate a feminist fable; the setting and the unknown family make for a possible Freudian showdown between one woman and her subconscious.

Many critics have suggested that Sunset lacks the obvious punch of its Holocaust-themed predecessor, but it’s eerie secretiveness adds to its splendour. A thing to be admired and puzzled over, featuring fantastic feats of millinery. Magic and hats, anyone?