Review: China’s director supreme Jia Zhangke outdoes himself with a thorny tale about the impossibility of love 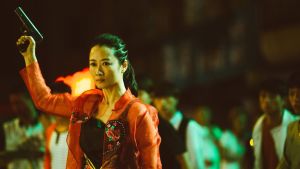 It’s 2001 in China and youngsters (and not so youngsters) take to the dancefloor to the strains of Village People’s YMCA, blissfully unaware of the upheavals to come.

Qiao, played by the director’s partner and longtime lead Zhao Tao, is a young woman who lives in a shabby coal-mining town where the pit is facing closure. Her boyfriend Bin (Liao Fan) is a dashing young jianghu, who runs a local seedy nightclub.

When Bin’s supremacy is challenged by younger wannabe mobsters, Qiao fires the shots that disperse them. She also goes down for Bin’s unregistered gun, serving five years in his stead. Upon release she goes to see him – he hasn’t visited her in prison – and he hides behind a new girlfriend and a new veneer of respectability. Their relationship increasingly mirrors seismic societal shifts.

Writer-director Jia Zhangke’s emergence from China’s underground cinema to become the most prominent film-makers from the “sixth generation” has been one of the most rewarding journeys for 21st century cinephiles.

Having won the Golden Lion at Venice in 2006 with Still Life, he has gained considerable international standing and additional financing from official funding bodies in China: to date, six of his films have been selected for competition at Cannes and more than one commentator has dubbed him “the most important film-maker working in the world today”. They’re not wrong.

Since his 2000 film Platform, Zhangke’s longform dramas have pondered and probed the sweeping changes visited on the People’s Republic of China since the Cultural Revolution. The auteur maintains an intriguing relationship with social realism. For 90 per cent of the runtime, Ash is Purest White looks to belong to the same class of seething post-capitalist malaise as the late Hu Bo’s An Elephant Sitting Still (2018) or Zhangke’s Have a Nice Day (2017). But in common with the filmmaker’s 2015 drama, Mountains May Depart, and that film’s sudden jump into the future, Ash throws a weird, extra-terrestrial curveball before returning to the interpersonal pyrotechnics that has governed the film from the beginning.

Above all things, this is a film about the impossibility of love: it’s When Harry Met Sally played out on a thorny landscape with a thornier ending. French cinematographer Eric Gautier (The Motorcycle Diaries, Pola X) provides an appropriately epic and glowering landscape.

Were it not for the six films and counting collaboration between German filmmaker Christian Petzold and actor Nina Hoss, then director Zhangke’s longtime collaborator and off-screen wife Zhao Tao would be unrivalled in contemporary cinema. As ever, Zhao Tao puts in the best performance you’ll see this year.

See it and marvel.