Still formidable after all these years, Sigourney takes the parts that interest her, be they big or small. Next up: a possible return to her most famous role in a rebooted ‘Alien’ series

Chappie and Still Alice get the once-over from Donald Clarke and Tara Brady. And how are journalists portrayed by Hollywood? Video: Niamh Guckian 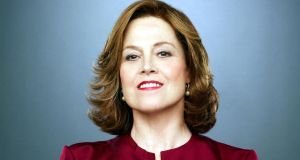 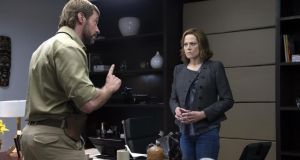 I’d be disappointed if Sigourney Weaver was any less of a presence. Dressed in classic black, towering over her publicists, with a chic bob, pearl earrings and diamond-cut cheekbones, she’s spent much of her 35 years on screen as the queen of sci-fi, her Yale education translated into intrinsic confidence when on screen, as proved in her defining roles in Alien and Avatar.

Yet when Weaver offers out a hand and a disarming smile, the characters within her disappear (as do the publicists), giving way to Sigourney herself: unassuming, kind and socially intelligent.

She’s well aware of the preconceptions, which have shaped her career more than she would have liked.

“I’m six feet tall, so in the beginning, when I was auditioning, I walked into a room and and the men would sit down because no one would want to look short next to me,” she says. “Maybe it’s not the case now, but back then, I really feel that a lot of producers were casting what they had grown up with as the ideal woman, and they were usually petite, blonde and blue-eyed. So it took a really unconventional director to think of me.

“I haven’t done as many love stories as I would have liked because of that; I’ve not been in a lot of conventional movies. But I’m very grateful for that, because I wouldn’t have enjoyed them.”

Instead, Weaver has undertaken boundary-pushing projects. Some films excelled (Gorillas In The Mist, The Ice Storm), others were mixed (Half Moon Street, Rampart), but her inclusion is always a sign of a movie’s depth.

Her latest project, and the reason we meet today, is Chappie. It’s directed by Neill Blomkamp (District 9, Elysium), who will reportedly take the reins of the Alien franchise from Ridley Scott and James Cameron. Reminiscent of 1980s classic Short Circuit, but with far more guns, Chappie follows a sentient robot duped into committing crimes by South African anti-establishment crew Die Antwoord, no less. Weaver plays the chief executive of the company whose programmers must stop him.

It’s a supporting role – Weaver’s scenes can be counted on two hands, with enough spare fingers to refuse the part. Which begs the question of whether she accepted it to test-run her working relationship with Blomkamp before the Aliens reboot.

“No not at all,” she says. “I follow the story. Always. If it’s an interesting story, I’ll take whatever part I can to help tell it, so I didn’t mind that it was small. We only started talking about Alien during the course of the film. It was just talk at first, then he sent on artwork and a breakdown of the basic story – it was one of those secret dialogues for the whole year. So it’s exciting, but it’s still hard for me to believe that it might actually happen.”

Weaver’s definitely-maybe replies on whether she’ll return as Ellen Ripley (“Neill’s formal commitment is a good sign; I wouldn’t do it if he wasn’t”) suggests that contracts are being finalised behind closed doors, much to the delight of sci-fi fans.

The groundbreaking franchise carries as much weight now as it did when it began in 1979. Twenty-three years after Alien’s release, it was inducted into the National Film Registry for its historical significance; more recently it’s a standard entry in online polls of best sci-fi films, along with its sequel, 1986’s Aliens (Aliens 3 and Alien Resurrection lag a little behind).

“It’s a credit to the directors,” says Weaver, reflecting on its endurance. “Ridley came up with a lot of camera techniques, which are still innovative. He gave us a vision of space as a real place: dirty and full of girlie magazines, the way I imagine space would probably be. And Jim [Cameron] continued that.”

The innovation extended to casting Weaver as the lead, making her the one of the first female action heroes after Pam Grier’s Foxy Brown and Linda Carter’s Wonder Woman, and arguably the most influential.

Fast-forward to the present. Weaver’s 1984 hit Ghostbusters is being rebooted with a female cast. Jennifer Lawrence is the lead in the blockbuster Hunger Games series. Oscar winner Patricia Arquette used her podium to demand equal pay for men and women (after leaked Sony documents uncovered that the female stars of American Hustle were given a smaller percentage of profits than the male stars).

Does Weaver feel like she paved the way at all? “I don’t know,” she says, rather modestly. “But I admire Patricia for using her moment to speak out about pay. It’s really time.”

Has she been paid less than her male co-stars? “Oh, yes. The difference is huge. Very significant. I let my agents and lawyer worry about that,” she says, glossing over the details. “The truth is, we do it because we love it, but it’s so patently unfair for male actors to be paid more than female actors. It doesn’t make any sense. They give you this hullabaloo about how actors bring men into movie theatres, as if actresses don’t. Come on,” she scoffs. “As if Scarlett Johansson doesn’t bring them in. Come on!”

She segues into discussing the treatment of actors more generally, explaining that studios are squeezing their cast as much as possible, regardless of gender.

“For example, Marvel doesn’t give their actors any participation until the film has surpassed the earlier film made. So if someone joins a Marvel film and they are supposed to get a tiny cut, that cut doesn’t even go into effect until the new film has made as much – like $2 billion – as the film before.

“It’s all so that actors don’t get money. I don’t know why you wouldn’t want to pay the people who help you do a good job.”

It’s certainly a growing trend, with tougher competition for roles and less revenue in Hollywood rebalancing negotiations. Sandra Bullock famously cut her asking price from $10 million to $5 million to secure the role in The Blind Side over Julia Roberts. Brad Pitt has admitted that the days of eight-figure salaries are gone (“that deal’s not flying these days”). The trend is to sacrifice upfront lump sums for a share of the movie’s earnings, hence Marvel’s dangerous precedent.

Just as I wonder whether this frustration relates to Weaver’s negotiations for Blomkamp’s Alien sequel – conjecture, of course – she concludes the subject by making the critical link between the film industry and all other industries (as sympathy regarding actors’ salaries is limited, to say the least).

“I’m glad that it’s been brought up for actors, and it needs to be discussed for all different fields in America, where we have so many people working three jobs just to make a living,” she says. “Companies believe in paying a woman with three children $8 to close the store at 9pm and reopen at 5am. It’s called ‘clopening’.

“The whole schism of what corporations think they should pay people on any level is so weird. Be ethical. Pay people what they need to live on.”

If only the queen of sci-fi were also queen of the world.

Normal People: The origins of Connell and Marianne
Real news has value SUBSCRIBE