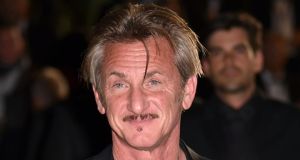 Sean Penn: “I don’t want it to be a trend, and I’m very suspicious of a movement that gets glommed onto in great stridency and rage and without nuance.” Photograph: Alberto Pizzoli/AFP/Getty

Sean Penn has spoken of his concerns about the #MeToo movement, worrying that it revolves around too many “salacious” revelations.

The 58-year-old actor, promoting his new TV drama, The First, was appearing on NBC’s Today programme with his costar Natasha McElhone when conversation shifted to the rise in women coming forward with their experiences of sexual harassment and abuse.

“This is a movement that was largely shouldered by a kind of receptacle of the salacious,” he told the show’s host Natalie Morales, who then asked him to explain what he meant. He replied: “Well, we don’t know what’s a fact in many of the cases. Salacious is as soon as you call something a movement that is really a series of many individual accusers, victims, accusations, some of which are unfounded.”

Penn went on to talk about what he thinks the negative effects are of the post-Harvey Weinstein string of stories emerging not only from the film industry but also from many other parts of life.

“The spirit of much of what has been the #MeToo movement is to divide men and women,” he said. Morales disagreed, saying she believed it was “uniting women”.

After talking about the women he has spoken to allegedly telling him that they believe the media discussion isn’t representing the whole picture, he moved on to his suspicions. “I don’t want it to be a trend, and I’m very suspicious of a movement that gets glommed on to in great stridency and rage and without nuance,” he said. “And even when people try to discuss it in a nuanced way, the nuance itself is attacked. I think it’s too black and white. In most things that are very important, it’s really good to just slow down.”

In an interview in May Penn said he believed the #MeToo movement was “not intellectually honest”, “a movement led by mania” and full of “self-aggrandisement and venting”. In his debut novel, Bob Honey Who Just Do Stuff, he ends with a poem defending Charlie Rose, who was fired from CBS after a range of sexual-harassment allegations. – Guardian