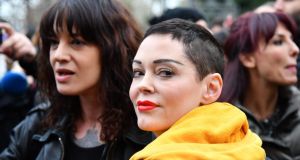 Asia Argento has threatened to take “immediate legal action” against Rose McGowan unless the latter retracts a statement she made on August 27th following accusations of sexual assault against Argento by the actor Jimmy Bennett.

Argento posted a statement on social media demanding that within 24 hours McGowan retract the “horrendous lies” she claimed were contained in the statement. “If you fail to address this libel I will have no option other than to take immediate legal action.”

Argento, a prominent figure in the Harvey Weinstein scandal and who in an October 2017 New Yorker article accused Weinstein of sexually assaulting her, was herself accused of sexual assault by Bennett in a New York Times article in August. Bennett also claimed she had paid him $380,000 to keep the accusation quiet. Argento has denied the assault allegation, and claims her then partner, Anthony Bourdain, paid the money to Bennett to help him with “severe economic problems”.

Dear @RoseMcGowan. It is with genuine regret that I am giving you 24 hours to retract and apologise for the horrendous lies made against me in your statement of August 27th. If you fail to address this libel I will have no option other than to take immediate legal action.

McGowan, another prominent Weinstein accuser who claimed the disgraced producer raped her when she was 23, first responded to the Argento accusation on social media on August 20th, writing “my heart is broken”. The statement to which Argento refers was issued seven days later.

Weinstein has denied all allegations of nonconsensual sexual relations.

Police in Los Angeles are investigating Bennett’s claim after it emerged no police report had been filed in 2013, the time of the alleged assault. The pair had met after working together on The Heart Is Deceitful Above All Things, Argento’s 2004 adaptation of the JT LeRoy novel.

McGowan has not yet responded to Argento’s statement. – Guardian