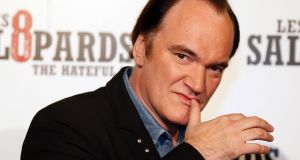 File photograph of director Quentin Tarantino. Many cinemagoers in Ireland will have a hard time seeing Tarantino’s new film ‘The Hateful Eight’ due to a distribution row. File photograph: Francois Guillot/AFP

One of Dublin’s busest cinemas will not be showing Quentin Tarantino’s much-anticipated western The Hateful Eight.

After failing to agree terms with distributor Entertainment Films, three major UK chains – Cineworld, Picturehouse and Curzon -- will not be screening the film. The Cineworld site on Parnell Street in Dublin is among the nation’s busiest cinemas.

It has, however, emerged that Irish Multiplex Cinemas (IMC) Group, which had not dealt with Entertainment in more than a decade, will be screening The Hateful Eight in 13 of its venues from Friday.

The details of the dispute with the British distributors remain clouded in claim and counterclaim.

Curzon commented: “On this occasion, the distributor has chosen to screen the film only in 70mm in the West End [ OF LONDON ]and in selected venues nationwide.”

A lengthy statement from Entertainment Films noted: “Cineworld had every opportunity to book the film in their other cinemas across the country on the same basis as other exhibitors and declined to do so. This is despite the fact that there is no dispute over the financial terms for this release.”

The news prompted IMC cinemas to revisit that company’s historical dispute with Entertainment. A paragraph on Facebook read: “We have heard that talks between yourselves and Cineworld in the UK/Ireland market have broken down and you are not showing The Hateful Eight with them. We at IMC Cinema Group would agree to any terms you were looking for if you would consider playing it in our cinemas, even in the Dublin territory if that is what you wanted.”

That company’s disagreement with Entertainment dates back to the early part of the last decade, before the Ward Anderson chain split into Omniplex Cinemas and IMC. In that time such Entertainment releases as Brokeback Mountain, The Departed and The Artist have failed to play in Ward Anderson or IMC venues.

Early on Tuesday evening, IMC made a surprising announcement on their Twitter feed: “IMC are delighted to announce The Hateful Eight will be playing in 13 IMC Cinemas throughout the island of Ireland from Friday!”

The Hateful Eight stars Samuel Jackson, Jennifer Jason Leigh and Tim Roth in a tale of violence and mystery from snowbound Wyoming. Lasting nearly three hours, the eighth feature from the director is expected to be a major draw this weekend.