While crafting his epic Olympic opening ceremony, director Danny Boyle also had a film on the boil. He might be the hardest working man in cinema, but he’s also the nicest 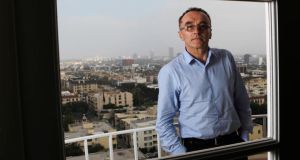 Does any other British filmmaker kick up quite so much affection as Danny Boyle? Yes, folk enjoyed Trainspotting and Slumdog Millionaire . True, his stubbornly egalitarian Olympics ceremony even managed to win over the Daily Mail . But, more importantly, there’s something about the man himself that people like: straight talking, endlessly good-natured, admirably unpretentious. Directors aren’t supposed to be this cuddly.

And he can talk. Ensconced in the Soho Hotel for promotional duties on Trance , a slick new thriller starring James McAvoy, Rosario Dawson and Vincent Cassel, he gives no sense that the interview is any sort of chore.

It is little wonder that, in the aftermath of the Olympics triumph, people began wondering if Queen Elizabeth – who famously appeared opposite James Bond in the jamboree – has asked her people to put a knighthood his way. Only the currently ubiquitous David Bowie is more obviously deficient in that department.

“They’re not really my cup of tea, those awards,” he says. “They’re not really related to the movies. It’s just a personal thing – more so in the context of the Olympics. We were trying to create a communal spirit. We didn’t want to pick out individuals. We said to all the celebrities who appeared: ‘You are guests in the volunteers’ show.’ And they came into it with that spirit. It would have been wrong for me or anybody else to get picked out for special attention.”

See? If success has brought on any affectations then he keeps them well hidden.

He also seems to have retained a northern work ethic. It is something of a miracle that Trance exists at all. One assumes that his job as artistic director of the 2012 Olympics Ceremony kept him pretty darn busy. Yet, somehow or other, Danny managed to shoot the picture – an art-heist romp blended with a psychosexual head-trip – in the gaps between royal appointments and the erection of virtual dark satanic mills. That’s time management for you.

“When we took on the Olympics, I was warned by some of the insiders, who you quickly make friends with: ‘Listen, it’s a two-year appointment and it’s meant to be exclusive but you’ll go mad if you just do this.’ There’s so much hanging around and waiting for this committee and that committee to get back.”

First sabbatical
He took a first sabbatical to produce an enormously successful National Theatre production of Frankenstein , in which Benedict Cumberbatch and Trainspotting alumnus Jonny Lee Miller alternated the roles of creature and creator.

“That was 2010 and, in 2011, our sabbatical was Trance ,” he says. “So we worked Thursday and Friday on the Olympics – because there’s a lot of down time when you’re not achieving anything tangible – and then Saturday, Sunday, Monday, Tuesday we shot Trance .”

Phew. We shouldn’t need to say that Boyle got his values from decent Irish parents. “My mother’s family – the Mulhearn family – are still living outside Galway, around Ballinasloe,” he says. “It’s one of the great places to visit even when you’re not from there.”

Raised in Radcliffe, a northern quarter of Manchester, Boyle, once an altar boy, originally had notions of becoming a priest. A less good-spirited fellow would now be railing about the outrages that have since overtaken the Catholic Church. Characteristically, Boyle seems full of understanding.

“I was brought up very strict Catholic,” he says. “My mum was very devout. And she gave me wonderful values. So when I outgrew the church in my teens – for rebellion or intellectual reasons or whatever – I did retain a lot of my mother’s values. Those values are broader than any institution. And they mustn’t be thrown out because the church’s reputation is tarnished.”

He recalls a quote attributed to Billy Connolly. “I don’t believe in God but I believe in people who do.”

Having rejected the notion of entering a seminary, Boyle ended up studying English and Drama at Bangor University. After graduation, he progressed through two institutions that have kept the radical spirit alive in English theatre.

A spell with the Joint Stock Theatre Company led him to the Royal Court Theatre in Sloane Square, where he directed productions of plays by Edward Bond and Howard Brenton.

Then television intervened. A spell at BBC Northern Ireland found him producing Alan Clarke’s still controversial Elephant , an unflinching examination of political violence in the North.

He remembers: “I think I only got the job because I was the only one who applied. I found that out subsequently. People were terrified of that image of Northern Ireland. They thought they’d be picked off as soon as they crossed that border.”

He was in the North from 1985 until 1989 and remembers the period with some affection. “I spent a lot of time in Belfast and Derry and they were fantastic places where I learned so much,” he says. “I had a wonderful time. I got the opportunity to make dramas that weren’t really about the Troubles. Nobody wanted to touch that subject.”

Throughout his time working in theatre and TV, Boyle harboured a restless enthusiasm for film. Boyle occupies an intriguing position in the pantheon of British cinema. There is little of Alfred Hitchcock’s creative repression or David Lean’s high-Tory colonial grandiosity in films such as Trainspotting or Shallow Grave . Sure enough, he cites that great British eccentric Nicolas Roeg – creator of the eerie Don’t Look Now and the eerier Bad Timing – as his greatest domestic influence.

“Everybody in Britain is always trying to argue between Alfred Hitchcock and David Lean, ” he says. “But it’s neither for me. It’s Roeg. I love that he’s non-linear and perfectionist about being an imperfectionist. I love that flow of imagery and psychology in his films.”

That makes a kind of sense. Trainspotting , Boyle’s second film, has a wild, raucous energy that might have pleased Roeg. The film can, without hyperbole, be said to have changed British cinema. Based on Irvine Welsh’s demotic novel, the tale of Scottish drug addicts taught the industry that it could tackle difficult issues without tying itself to the kitchen sink.

A slightly tricky period followed. His first American project, a road movie called A Life Less Ordinary, did not make the best use of Cameron Diaz and Ewan McGregor. The film that followed, The Beach , counts as another significant misstep. Many observers began to worry if Boyle might turn out to be a one-hit wonder.

“ The Beach is the one we spent too much money on,” he remembers. “It distorted the experience of the film. We spent money on it just because we could. And it didn’t really help the film. By Slumdog Millionaire , I had learned that lesson well. We took eight people and hired locals.”

A new aesthetic
Between The Beach , released in 2000, and Slumdog Millionaire , a hit in 2008, Boyle rediscovered himself with economically shot, more idiosyncratic projects, such as the horror film 28 Days Later and the science-fiction flick Sunshine . His style solidified: feisty digital photography, promiscuous use of music, restless cutting.

It’s a funny old business. Few people could have guessed that a film about a game-show contestant in Mumbai would end up winning eight Oscars and re-establishing its director as his country’s hottest film-maker. The film that followed, 127 Hours , was also nominated for best picture. Even now, when we’ve absorbed the information, the Slumdog story seems delightfully implausible.

“A film like Slumdog is a surprise,” he says. “But it’s only a surprise because it has an Indian setting. It’s actually a big, live, happy story. A film like 127 Hours is much more narrow because it’s a film about a guy who does nothing for six days and then cuts his own arm off. I thought that Slumdog would be hindered by the fact that a third of the film was in Hindi. That never seemed to get in the way.”

At the risk of dipping into cheap aphorisms, the moral of Boyle’s tale seems simple to state: be yourself. Trance is a glossy sort of picture. But, like all his best work, it was shot without too much fuss on a sane budget in disciplined fashion.

“I had a brief flirtation with bigger budgets,” he says, thinking back to The Beach . “But it’s not really my forte. Is it? It doesn’t really get the best out of me. I find there’s so much money wasted on those films and I find that very difficult to watch.”

He allows himself a contradiction.

“I love – I adore – watching big films,” he says. “And my favourite film, Apocalypse Now , wasted plenty obviously and was clinically insane to make. But, for me, bigger budgets just don’t suit.”

If you wanted to catch him out, you could now bring up the issue of the Olympics. Then again, £20 million, the rumoured budget, would be modest for a Hollywood movie, and it is allegedly only 20 per cent of what the Beijing organisers spent on their blockbusting ceremony four years earlier. More to the point, with its dancing NHS nurses and thumping techno, the bash seemed very true to Boyle’s own lovable sensibilities. This was a Britain that even the son of Galwegians could admire.

“For all its faults this is a modern, progressive country that is inclusive,” he says. “It’s a beacon for people. I think people look at us and say: that’s not a bad place, you can go there, be who you are, work hard and it will give you something back.”

Tiger King: You wait years for just one animal-collecting weirdo, then half a dozen arrive at once
10