Nativity Rocks! This Ain’t No Silent Night: Christmas sequel pumps up the volume

Review: The fourth in the series is tolerable, but it’s like a tourist board ad for Coventry 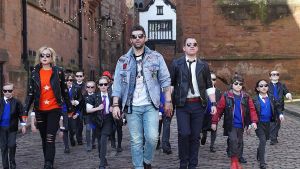 Coventry, as the fictional mayor of that place reminds us in Nativity Rocks, has survived bombing and rationing and poverty. But can it withstand a fourth film in the Nativity sequence?

The follow-up to the entirely risible Nativity 3: Dude, Where’s My Donkey? has, in keeping with the other instalments, managed to lose B-list celebs between films. Over the years, Games of Thrones has lost fewer key players.

Out go Catherine Tate, Martin Clunes, and Mark Wootton; in come the transplants from Nativity, the musical theatre production. That’s not a bad thing. Channelling Jack Black in School of Rock, West End star Simon Lipkin invests the proceedings with plenty of demented energy as a wacky man-child who teams up with a stray dog and a Syrian child refugee named Doru. Take that, Brexit Britain.

Mostly, the plot – insofar as one can use the word – concerns the staging of a rock opera so that the magnificent city of Coventry, which gets plenty of tourist board-friendly framing throughout, might be declared the most Christmassy city in the land.

Along the way, neglectful executive parents Hugh Dennis and Anna Chancellor learn to be less neglectful, Strictly Come Dancing’s Craig Revel Horwood flounces magnificently as a preening impresario, Doru searches for his estranged father, and everyone comes together to put on a spirited, if utterly baffling version of the birth of Jesus.

Characters come and go randomly – we’re still scratching our heads over Jessica Hynes’s late appearance. There’s a lot of chatter about family and Christmas and the magnificent city of Coventry – did we mention Coventry already?

It’s still marginally more tolerable than the last one.

Bridge on the River Kwai: ‘This film does not authentically portray the conduct of British officers’
5

New crime fiction: Shot in the arm for the hackneyed serial killer yarn
10