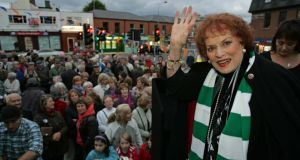 Maureen O’Hara photographed in Ranelagh, Dublin in 2010 when she formally opened the Ranelagh Arts Festival. The Quiet Man star Maureen O’Hara has been awarded a lifetime achievement Oscar from the Academy of Motion Picture Arts and Sciences. Photograph: Frank Miller/The Irish Times. 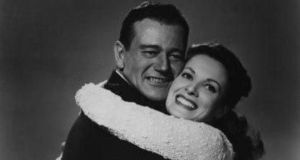 Maureen O’Hara with John Wayne in a publicity still for ‘The Quiet Man’.

Dublin-born actor Maureen O’Hara is to receive a lifetime achievement Oscar from the Academy of Motion Picture Arts and Sciences.

“The Governors Awards allow us to reflect upon not the year in film, but the achievements of a lifetime,” said Academy president Cheryl Boone Isaacs. “We’re absolutely thrilled to honor these outstanding members of our global filmmaking community and look forward to celebrating with them in November.”

Noted as a flame-haired beauty, O’Hara also starred in films such as The Black Swan, Sinbad the Sailor, the This Land Is Mine and Miracle on 34th Street.

She was a favourite of director John Ford, who cast her in five of his films, including Rio Grande, How Green Was My Valley, and The Quiet Man - a film in which she appeared alongside John Wayne that was largely shot in counties Mayo and Galway.

The Academy said the the Honorary Award, an Oscar statuette, is given “to honour extraordinary distinction in lifetime achievement, exceptional contributions to the state of motion picture arts and sciences, or for outstanding service to the Academy.